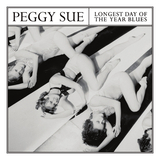 Longest Day Of The Year Blues

Artist: Peggy Sue Title: Longest Day Of The Year Blues Label: Wichita Recordings Impact Date: 10th February 2013 “A troubled gospel ode to unemployment, Idle comes littered with echo-laden guitars and a prayer-like mantra.” – The Guardian “A beautiful, gospel-tinged track” – The Line of Best Fit "Their music has the same simplicity which rippled through Buddy Holly but with an eloquence which comes from new technology, new material."- Clash In anticipation of their forthcoming album ‘Choir of Echoes’, which is set for release on January 27th through Wichita, Peggy Sue have revealed a new track ‘Longest Day of the Year Blues’ from the record. In the words of the band, ‘Longest Day of the Year Blues’ “is a pretty straightforward break up song. One of those break up songs about getting dumped and having to go to work the next day when the next day happens to be the longest day of the year. I remember thinking to myself cynically 'Well this sucks... But at least it's wonderfully poetic.' It has the word 'baby' in it 5 times. I guess I may have been listening to my Greatest Ever Doo Wop Song compilation a little too much last summer.” Produced at the legendary Rockfield Studio in South Wales by Jimmy Robertson (the man who made the “…Scorpio Rising" collection), and mixed by John Askew (who also worked with the band on their debut full-length, ‘Fossils and Other Phantoms’) the new Peggy Sue album will be released early next year, on January 27th. ‘Choir of Echoes’ is an album about singing. About losing your voice and finding it again” they explain. “Voices keeping each other company and voices competing for space. The call and response of the kindest and the cruelest words. Choruses. Duets. Whispers and shouts." If you’ve ever wondered “Peggy Who?”, then here’s your answer. The past two years have allowed the band time to experience a vast array of new sights and sounds, which have translated wonderfully into their new work. ‘Choir of Echoes’ sees Peggy Sue come back around on their best form to date, and provides an emotional venture into a realm of sensibility that this band have to offer. See Peggy Sue live: 27th Jan - London, St Pancras Old Church * - SOLD OUT 27th March - Copenhagen, Ideal Bar @VEGA * 28th March - Hamburg, Kulturhaus III & 70 * 30th March - Berlin, Privatclub * 31st March - Munich, Kranhalle * 1st April - Cologne, Blue Shell * 2nd April - Brussels, Botanique (Witloof Bar) 3rd April - Utrecht, Ekko 7th April - Brighton, Green Door Store * 8th April - Coventry, The Tin 9th April - Manchester, Soup Kitchen * 10th April - Glasgow, Broadcast * 11th April - Liverpool, Leaf * 12th April - Sheffield, The Harley * 14th April - Bristol, The Old Bookshop * 15th April - London, Oslo * - with support from Eyes & No Eyes.