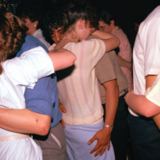 Artist: Spector Title: Fine Not Fine Label: Moth Noise Impact Date: 27th April 2018 Following the release of the critically acclaimed single ‘Untitled in D’, which received support from BBC Radio 1, Spotify’s New Music Friday, NME, The Independent, i-D, DIY and Wonderland to name just a few, today Spector reveal the next taste of their highly anticipated ‘Ex-Directory’ EP, the irresistible ‘Fine Not Fine’. As well as new music, Spector also announce that they’re hitting the road for their first tour of 2018, culminating at the Scala on May 24th, as well as the first of many UK festival appearances. ‘Fine Not Fine’ finds Spector at their best. Somewhere between Footloose and The Rat, the track once again shows the group’s impressive ability to juxtapose infectious, driving melodies with Fred Macpherson’s witty, perceptive and always relatable lyrics, which on this occasion includes the inimitable line “I know scum who sold their stories, some of your best friends are Tories”. Fred explained “Fine Not Fine came from a session where I panicked I wasn’t writing enough songs so tried to finish ten in a week. I think I only got to two but they both ended up on this EP. This one was a stream of consciousness inspired by the more self loathing corners of sad twitter - looking at the state of your life a third of the way through and realising it’s just a veneer or an unconvincing brave face. A Spector listener (I don’t really feel comfortable with the word fan) once told me our lyrics were good because every line could be an instagram caption. In which case they’re going to love this one. It’s also our fastest song to date for some reason - faster than Chevy Thunder which was 180bpm. Too fast if anything.” It’s been two years since Spector released their critically acclaimed sophomore album ‘Moth Boys’, a record which indicated just what the band are capable of. Its lead track ‘All The Sad Young Men’ became their most successful song to date and a calling card of their energetic and impassioned live shows. With the band regrouped and reenergised, the wait for new music is now over and fans are not going to be disappointed. SPECTOR PLAY: MAY 2018 Saturday 5th Leicester, Handmade Festival Sunday 6th Dorset, Teddy Rocks Festival Sunday 20th Sheffield, The Plug Mon 21st Nottingham, The Bodega Social Club Tue 22nd Bristol, The Thekla Wed 23rd Manchester, Gorilla Thu 24th London, Scala