Back to Offensive Ground's Music <
Album 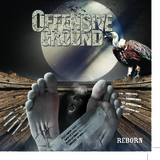 Band name: Offensive Ground. Genre: Southern Metal/Hard Rock Formed: September 2011. Place of residence: Luleå, Sweden. Band members: Alvaro Araya Leon, Vocals. Tian Mammola, Guitar. Stanislav Pokhilo, Drums. Niklas John Storvall, Bass. Christer Hörnqvist, Guitar. Record label: None. Contact: info@offensiveground.com Current Affairs: New Single 'Mistake' out late on 15 / 11-2014 http://www.youtube.com/watch?v=R2Gp0zACYbE New Album "Reborn", recorded, produced, mixed and mastered by Ronnie Björnström (Guitarist AEON) in Garage Land Studio. Released January 15, 2015. Support for Smash into Pieces during their tour through Spain between March 12th – 15th. Signs with the UK based Promotion Company, Two side moon promotions web: www.facebook.com/OffensiveGround www.youtube.com/offensiveground www.instagram.com/OffensiveGround www.twitter.com/OffensiveGround www.reverbnation.com/offensiveground Influences: Pantera, Metallica, Megadeath, Slayer, Machine Head, Audioslave, Godsmack, Linkin Park, Corroded, Avenged Sevenfold, mustache, Barley, Pain, Soundgarden, Pearl Jam, Alice in Chains, Nirvana, Disturbed, Motorhead, Gun's and Roses, Velvet Revolver , Black Label Society, Stone Sour, Ghost, etc. Background: Offensive Ground was formed in September 2011. In February 2014 the band was hit hard. After nearly three years of playing together, three of the original members decided to leave the band because they felt that their ambition was no longer in line with Alvaro and Tian. It was a hard strike. A few weeks earlier, the band had been chosen among 200 bands, as one of 16 bands to compete in Sweden semifinals in Wacken Sweden Metal Battle, with the chance to get to one of the world's biggest rock scenes: The Wacken Open Air 2014. Alvaro and Tian had no intention to cancel and they did everything in their power to get to the race. In less than a week, they found a new drummer, Stanislav Pokhilo, and a new bassist Niklas Storvall. In less than four rehearsals, they managed to do two songs and succeed to come to the competition. After this great achievement, neither Alvaro or Tian had to worry about Stanislav or Niklas could handle the task. But the lack of a rhythmic guitarist became increasingly evident as new material was created. The band had difficulty filling the empty spots during Tians solos. For this reason, the band decided to take in a rhythmic guitarist. Today, Offensive Ground is consisted by: Alvaro Araya Leon singer. Tian Mammola, guitar. Niklas Storvall, electric bass. Christer Hörnqvist, rhythmic guitar. Stanislav Pokhilo, drums and percussion. As the band got new members, the sound of the band changed drastic. From having had a more melodic sound in their songs in the beginning of Offensive Ground, now the sound became more aggressive and the songs started to become more and more technical. After this successful fusion of new blood, the band decides to record what will be the band's first album. In September 2014, Offensive Ground enters Garage Land studios in Umeå under the guidance of producer Ronnie Björnström, better known as guitarist for the death metal band AEON. It was be a busy and intense week for the band, resulting in their first album titled REBORN. After the album was finished, it became quite clear that Offensive Ground had become a new band when it comes to sound, technic and professionalism among the new mix of band members. Together, all members determine to shut down and remove all the old material they had published before 2014. The reason is that the band, does no longer want to be associated with the old sound. In Jan 15th of 2015, Offensive Ground released their album "Reborn". The album has already gained a lot of attention in different magazines, webzines radio stations and online radio around the globe.