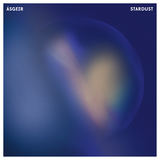 “What I hear in this song is a shift from guitar-based music toward laptop electronics, something like the shift Bon Iver made and that James Blake has been pioneering — that mix of the intimate with the machine.” – NPR

“Asgeir became the toast of Iceland with his gorgeous debut album…he’s returning with an edgier, electronic element to his sound on a new song, ‘Unbound’” – Evening Standard

“A beautiful voice” *** The Guardian ‘Album of the Week’

“Ennobling” The Observer ‘Album of the Week’

Singer-songwriter, multi-instrumentalist and collaborator; the mighty Ásgeir has shared brand new single ‘Stardust’, taken from his highly anticipated and daringly electronic second album 'Afterglow'. Out on 5th May via One Little Indian Records in the UK and Columbia in the US, the Icelandic artist has spent three years honing and perfecting the eleven tracks that make up this magnificent and affecting body of work.

Ásgeir explains: "Stardust is a song that I wrote fairly early on in the whole new album process – it was around summer 2015. I wanted to write a pop song that experiments with various sounds and production and that wouldn't be too ‘serious’. The outcome is, to me, a very honest song that comes from a part of me that I usually don't pay much attention to."

How do you follow up the fastest selling debut album in Icelandic history, a record that out-performed even national treasures Björk and Sigur Rós’ first releases? ‘Stardust’ has all the confident hallmarks of an artist who’s now at home with his status as one of music’s most exciting new voices. “I consider myself lucky to have been able to go around the world with my friends to play,” Ásgeir says. That globe-trotting wisdom is keenly felt on the album, ‘Afterglow’, which ambitiously balances icy electronic shades of Bon Iver, James Blake and Anohni with soul, R&B and even gospel influences from different eras and places.

The album leaves behind the folk-tinged acoustics of 2014 debut album ‘In The Silence’ and dives into melancholic electronica in its purest form. The spell-binding artist has also once again collaborated with producer Guðmundur Kristinn Jónsson and his father – renowned poet Einar Georg Einarsson – for ‘Afterglow’, who is credited with writing the lyrics for the album alongside long-time musical collaborators, Ásgeir’s brother Thorsteinn and Julius Robertsson.

Talking about ‘Afterglow’, Ásgeir said: "I feel like I have achieved plenty already with this album, gotten to know myself better, feel like I’ve grown a lot. Not just because of the album, but it has definitely helped."

Winner of the 2012 Album of the Year at the Icelandic Music Awards, ‘In The Silence’ sold so many copies that it is estimated one-tenth of the population now owns that release. (BBC Radio 2 host, Dermot O'Leary, once tested this theory out, calling a random number in the Icelandic phonebook – the woman who answered not only owned a copy, but Ásgeir’s mother had taught her son at school.) The ubiquity of the album (entitled ‘Dýrð í dauðaþögn’ in Iceland) also caught the attention of musician John Grant, who immediately recognised Ásgeir's musical talent and ended up translating the lyrics into English for the international version of the album.

The introverted and humble artist couldn’t have predicted the immensity of his success off the back of ‘In The Silence’ – coming from the Icelandic town of Laugarbakki, populated by just 40 people. The same year, Ásgeir sold out two shows at Sydney Opera House, one at Shepard’s Bush Empire and played a mesmerising show at London’s Union Chapel, which sold out months in advance. The album became the fastest selling debut from a home grown artist in Iceland, breaking all previous records and outselling Björk and Sigur Ros by a long way. At just 20 years of age, Ásgeir had become an overnight sensation.