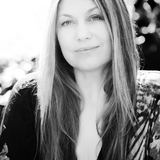 'Scattered' and 'Vermillion' both taken from Astrid's latest album 'We Go To Dream', out now. Astrid Williamson New Album ‘We Go to Dream’ One Little Indian CD & DL, Out Now Cat. No. TPLP1251CD/ TPLP1251DL “Her vocal delivery approaches John Martyn levels of abstractedness & emotional impact.” The Sunday Times “Williamson’s voice on this record is often divinely beautiful.” Uncut “A rich and satisfying record” 4/5 Sunday Express “There is a golden warmth to these eleven numbers which burns through softly with a deeply meditative glow.” 8/10 Popmatters There is a definite theme of change and reinvention to Astrid Williamson’s life since her 2011 album Pulse broke fresh new ground for the singer-songwriter and, following an extended period as a studio collaborator and touring musician with Dead Can Dance, she returns with a brand new album of her own. We Go To Dream, released on the 31st July explores Astrid’s need to keep pushing the boundaries of her work. Principally, the album follows three threads. First, what Astrid calls, “the addiction of love,” often in its unrequited form, of which ‘Scattered’ is her most heart-aching song ever, here in its original demo form as no subsequent recording could match the vocals intensity. ‘My Beautiful Muse’, by comparison, is more about a love affair that petered out, “There is a poignant, gentle sense of loss in that track,” she feels. The title track wonders “if humanity can ever dream up a better future than rampant capitalism and materialism.” While lead single, ‘Hide In Your Heart’ posits an escape into love in the face of humanity’s problems - such as those on ‘Loaded Like A Gun’, “a protest song, anti-war and pro-feminist,” she says. “The divinity we find in humanity gets completely trashed by ideologies. It offends me that we’re backtracking on the rights that women fought for a hundred years ago.” The third theme is “the spiritual element inside…trying to find that divine spark in ourselves, because we can't be fulfilled outwardly.” A practitioner of Transcendental Meditation (TM) and inspired by film director David Lynch’s Operation Warrior Wellness, Astrid is contributing some original classical music to the David Lynch Foundation in the UK, working with veterans with Post-Traumatic Stress Disorder. Joining the reunited Dead Can Dance (on keyboards and backing vocals) for their world tour spanning 2012 and 2013, Astrid met engineer/ programmer/ drummer James Orr, whose studio project Fixed Error released the Makeshift Remedies album in 2013, and which convinced Astrid “it might be exciting to make a record together.” The results - from beautiful widescreen vistas (‘We Go To Dream’, ‘Hide In Your Heart’ and ‘Ambienza’) to hook-lined dance (‘Loaded Like A Gun’, ‘Say Goodbye’, ‘Home’)and exquisitely bruised ballads (‘Scattered’, ‘Vermillion’, ‘Captured’, ‘Saint Saviour’) – are typically hard to pigeonhole. “I love diversity,” says Astrid. “So that’s the kind of music I do. I still like pop music, those big in-your-face choruses….You have to make the album that you want to.” Astrid 's upcoming live shows : 13th April - Henry Tudor House, Shrewsbury 14th April,The Musician, Leicester 15th April - Sydenham Arts Centre, Sydenham 22nd April - Arlington Arts Centre, Arlington 23rd April - The Hat Club, Beaconsfield 26th April - The Stables, Milton Keynes 27th April - The Bicycle Shop, Norwich 28th April - Kitchen Garden Cafe, Birmingham 29th April - Mining Institute Newcastle Upon Tyne 15th May- The Yard Sessions Alderley Edge