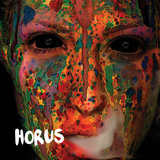 A musical force hailing from the heart of the Black Country, God Damn are a red-hot burning molten pot of pop hooks and grinding, bludgeoning riffs and rhythms. Having helped keep UK rock alive and vital since their inception in 2010, sharing stages with the likes of Eagulls, Pulled Apart By Horses, Icarus Line and The Wytches and recently signed to One Little Indian Records, God Damn are proud to announce the release of their new single ‘Horus’, due for release this coming October 27th.

A flurry of distorted guitar signals the start of ‘Horus’, before the band come charging in, creating a thick wall of disconcerting rock noise that aims to creep you out as much as it does thrill you. With a lyrical theme that references the Egyptian Sun god Horus (who has the body of a man, a birds head, with one eye the sun and the other the moon!), ‘Horus’ explores utopian ideas with a brooding, dark musical background that is set to pulverise when the band start touring across the UK from early September.

“We can’t wait to take this new material out on the road! We are known for being one of the rawest on the circuit using heavy dynamics with a quiet/loud/jet-engine decibel range…a sing-along nosebleed kinda vibration,” laughs vocalist and guitarist Thom Edward. “We've made a very textured, visceral and angry record with those pop barbed hooks. We’re fully intent on making layered studio albums with depth and then gloves off, knuckle dusters on for the shows!”

Dark and brooding yet still reading high in the energy stakes, God Damn are set to burn our musical climate to bits as they prepare for the release of their debut album in April of 2015 and take to the road for the remainder of the year, hooking up for tours with Kagoule and Turbowolf alongside appearances at Bestival and the Reeperbahn club festival.