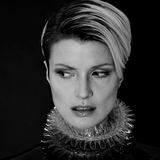 
“Grand compositional ambitions and a dynamic voice ... the arty, adventurous edge of pop” –– New York Times
“Mesmerizing, eventful, and strange” –– Pitchfork
“Spectacularly well-unified and exceptional” –– Wondering Sound
“One can imagine Bell walking away... already on to the next flight of imagination before the inevitable accolades have had a chance to flow in.” –– The Quietus
“[An] inventive and progressive release from an exceptionally talented young musician.” –– Line of Best Fit
“For those uninitiated, Bell's work lies somewhere between an industrial night at Berghain and a cyborg performing at Carnegie Hall.” –– Dummy Magazine

“This record is first for the body, then for the mind,” says Bell, who began writing the album immediately after seeing the film Paris Is Burning. “I started every song by thinking about tempo specifically, listening to the metronome alone, feeling its relation to my body, to the pace of the day, the weather, the light. On fast days I listened to club music, most of it at least twenty years old, and on slow days I turned to early West Coast hip-hop and Portishead because of how physically charged and compelling these records feel despite their low BPM.”

The first single from the album, “Randomness,” recently received a “Best New Track” designation at Pitchfork after it was premiered by Dummy, who described the house-influenced track as “the fuel of self-manifestation.” The Minister Akins-directed video premiered at i-D, who called the video “fire” and said of the track, “if you’re anything like us, you’ve probably had [it] stuck in your head since it surfaced earlier this month.”

The highly anticipated LP follows the October release of Incitation, a five-track EP described by NOWNESS as “a perfect platform for Bell’s remarkable voice, mirroring the unflinching, self-analyzing lyrics.” Pitchfork went on to praise Bell’s “muscular voice” and “knack for arrangements that are simultaneously refined and overwhelming,” while The New York Times lauded her “forthright, supple melodies to hold everything together, and a voice—creamy, vibrant, sensual—that makes all her conundrums startlingly immediate.”

Born in Moscow and raised in Alaska, Bell is a composer, producer and performer based in Brooklyn. A prodigious classical pianist as a child and teenager, Bell graduated from Boston’s New England Conservatory before moving to New York City to pursue electronic composition and songwriting. In 2011 she received a Jerome Fund Grant from the American Composers Forum to aid in the completion of her first large-scale composition, Krai, which was released as an album in 2014 after a sold-out premiere at the Walker Art Center in Minneapolis. The New York Times described Krai as “at once a folkloric study of her homeland and a contemporary exercise in electronic production.” Bell continues to perform Krai, premiering a new arrangement with the Grammy-nominated string orchestra A Far Cry at Boston’s Isabella Stewart Gardner Museum in March.