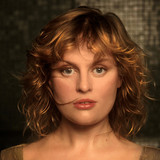 Released earlier this year, Sudden Elevation, Ólöf Arnald’s acclaimed third full album – her first sung entirely in English - captures a rare and idiosyncratic songwriting talent in full bloom. Ólöf releases a new single from the album, Call It What You Want on 25th November to coincide with international shows including a UK date at The Slaughtered Lamb on 13th November and Iceland Airwaves (1st November). The full dates are as follows:

Ólöf also makes available a free download, The Matador EP comprising 4 Icelandic songs originally included as a cover-mount with Spanish art magazine Matador last year. Three songs (Lát vaxa, Blóm, and Hlið) were composed by Skúli Sverrisson with lyrics by Ólöf, while Af stað was written for Bjork’s Náttúra concert in Reykjavík in June 2008. The lyric of the latter song is based on an old Icelandic nationalist poem. “I twisted all the words around” explains Ólöf, “Making fun of the over-romanticised pride of our country and put the emphasis on how much nature gives us as people; the rest, the piece of mind, the inspiration, the big picture... I sung about how the Icelandic nation was literally getting drunk from individual gain and self-importance. Three months later the country´s economy collapsed…”

Produced again by long-time collaborator, Skúli, Sudden Elevation was largely recorded in a late autumn 2011 stint in a seaside cabin in Hvalfjörður (literally ‘Whale-fjord’), in the west of Iceland.