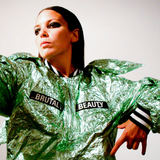 s a r a s a r a’s infatuation with electronic music at a young age found her seeking out clubs in Belgium at sixteen years old. She says: “I fell in love right away with the music, the people like a community, the freedom, the craziness, the whole nightlife way of thinking. I met fascinating people with such an incredible knowledge of all types of music, as they’d been playing in clubs since the 80’s. They who became friends and even family.”

After consuming the back catalogues of artists including Ricardo Villalobos and Aphex Twin, as well Matthew Herbert, s a r a s a r a began DJing in local bars and clubs. Having cut her teeth as a DJ, she yearned to further her creative outlet and she sold her record collection and decks and purchased gear to begin creating her own music. Combining a diverse range of influences such as Warp stalwarts LFO, Björk, Vanessa Paradis, Nick Cave and the Bad Seeds along with her interest in philosophy, literature and film, s a r a s a r a found her voice as a bold and unique artist, with a true vision.

Graced with an enchanting voice tinged with mystery, s a r a s a r a has cultivated a precise and startling individual sound and aesthetic. She says: “ Music definitely has a concrete function for me. It’s not art for art’s sake, it's an opportunity to get introspective. I have always felt the urge to question and master myself in order to make the best decisions, to make the most of the short time that I have in this life or body. I want every little thing to be exactly as I want it to be, as if I wanted it to repeat for eternity.”

“ I always start from my point of view, my experiences, what I see around me, what I feel and I try to make something out of it, a kind of rule or manifesto for myself that will lead to concrete actions or decisions. This process takes a lot of time, it requires solitude. It can be very confusing but in the end, you always come up with a new piece of the puzzle that is you.

It’s only once you’ve done that work that you can start to live in the the now and make every minute count, which is the absolute goal. This is what hedonism is for me. My music is a write-up of this process in time. I hope in the end, people will enjoy it and even be able to relate to it.“