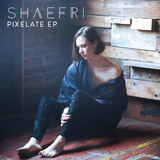 ARTIST: SHAEFRI TITLE: ‘PIXELATE’ FORMAT: DIGITAL “a more self-assured voice and astounding lyrical depth...the 22 year old finds a unique motif for untangling the threads of a dysfunctional relationship” - Hot Press London-based electronic-pop artist Shaefri proudly presents her pulsating new single ‘Pixelate’, set to drop 21st October 2016. Shaefri cut her teeth on London’s scene over the last five years with gigs across the capital from The Round¬house to The Borderline. Now, the elusive artist showcases her neatly refined electronic sound; a unique combination of influences derived from her mixed Irish-Egyptian heritage, offset with the pulse of the metropolis she calls home. Recognised early on in Ireland, having been tipped as ‘number one new act to follow’ by Hot Press’, Shaefri has already secured coveted headline gigs in places such as Bush Hall, and Whelan’s. Now having developed her sultry siren ¬¬-songs, she spins tales of light and dark, tease and torture with a lengthy attack on the soft and lukewarm pads, combined with minimal drums, dry finger snaps and offbeat twinkling plucks from production duo, J. Harvey Jones. The track creates a hugely atmospheric and emotive setting for the listener. Shaefri’s crisp vocals provide a wonderful contrast to the carefully crafted instrumental; her vocal crescendos accentuated by a more forceful tone and clipped syllables with the eerie and reflective essence of the track being maintained through her Irish glissandos. ‘Pixelate’, the title track from her forthcoming EP, set for release early 2017, is darker than Shaefri’s earlier work. The more mature sound provides the perfect platform for lyrics that confront the growing pains of love, lust, and letting go. Her lyrics hit hard with cutting imagery, intense emotion, and seductive hooks that linger in the mind as it wonders over nights gone by. This is music that is unapologetic, affronting, and affirmative. Strength surges through every beat with a lesson in each line from Shaefri, the ever dominant and enchanting narrator. The release of the well-written and produced track coincides with an official video release, directed by Gundeep Anand, edited by prestigious production house, The Mill and supported by renowned Director of Photography, Tom Elliot (A$AP Rocky). ‘Pixelate’, the video, is unique in the sense that it was brought to life by 40 fans who wanted to create a visual aesthetic that’s equally as haunting as the music itself. The video’s concept is forward-thinking as it focuses on how ‘pixelating’ can be taken out of context to represent emotions and relationships. The core message to be taken from the video is that sometimes we need to take a leap of faith and break free from all of our constraints and everything we know in order to rebuild ourselves as an image that is actually complete.