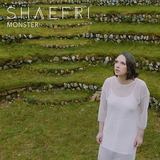 “Combines an intensity of sound with a tenderness of touch... a crystalline piece of synth pop” – Clash London-based electronic-pop artist Shaefri releases the emotive third single ‘Monster,’ out 17th March 2017, ahead of her forthcoming EP ‘Cracks’. Shaefri’s sound is a unique combination of influences derived from her mixed Irish-Egyptian heritage as well as experiences in the concrete jungle of London. After the success of her previous releases, ‘Pixelate’ and ‘Rabbit Hole’, Shaefri has seen an influx of support from Clash, C-Heads, and Hattie Pearson at Radio X to name a few, whilst her unique brand of haunting vocals and minimalistic beats have seen her perform at venues across London, such as The Borderline and Bush Hall. On 6th April she will mark the release of the debut EP ‘Cracks’ by playing live at The Notting Hill Arts Club, alongside her producers J Harvey Jones and supported by Tay Salem. ‘Monster’ is a song about resisting your weaknesses. It focuses on the struggle of the internal self and fighting your demons. The electronic-pop singer uses her consistently mesmerising vocals to explain this inner battle. “Are you ready, start the fight”, she sings against soft, minimalist synths. As the song progresses it builds with an emotive, atmospheric sound; Shaefri sings, “Start beneath my bed then crawl into my head”, this lyric plays on the shift from being afraid of the dark/monsters as a child, to internalising your fears and becoming fearful of what you are capable of as you grow older. This chorus repeats itself against a crescendo of harmonic synths, which eventually dissolve into a calming end of mellow reflection, maybe it is your demons that make you who you are. Speaking on the song Shaefri explains “I wrote Monster at a time when I was in a bit of a dark place, and I found it to be a useful way of helping me accept that I had this ‘creature’ within me, that likes to self-destruct, but to try to resist it whilst learning to live alongside it - we all have our demons, but they help to make us who we are." Shaefri’s stunning vocals, atmospheric electronics and insightful storytelling on ‘Monster’ continue to show why she is a force to be reckoned with. Be sure not to miss the ‘Cracks’ EP after it’s revealed at her Notting Hill Arts Club launch night on 6th April.