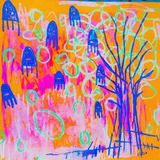 Hailing from Whitby but now residing in Margate, Conrad Deadly is seasoned artist and musician. Having cut his teeth in bands and playing solo shows all across the globe, he’s now ready to make his mark in the motherland. Conrad also happens to be an internationally acclaimed model, but that’s a whole different story... ⁠
⁠
With his musical roots firmly embedded in punk, Britpop and folk, these fusion together with a warm and fuzzy yet rapturous balance, enabling the strong underlying messages of rebellion and hope to echo through. ⁠Conrad combines these musical messages with abstract drawings to accompany his lyrics, to strive for positivity and making a difference, not only to people, but in the world for the better, especially in such uncertain times. ⁠
⁠
Last summer saw Conrad make his international festival debut with an appearance at Meadows in the Mountains, Bulgaria and Nakkefestival, Denmark. Having had samples of his music used in fashion films in Asia, Conrad has successfully built an extensive following in South Korea, which has lead to a number of well received shows.⁠
⁠
His debut single ‘Sally Lives In My Girl’s Yard’ was released on 17 March. ‘Sally’ is an uptempo, crowd pleasing true story set to music, produced by Dan White (Tribes, Johnny Lloyd). With its infectious melody and sing-along chorus, it’s an ideal debut single, set to really make its mark on the airwaves. Second single ‘Cults’, also produced by White, is a hard hitting indie/folk track. Once again a reflection of a true life situation. A dark occurrence that appears to go relatively unnoticed, but a something that so many get unwittingly drawn into. This track really showcases Conrad’s honest lyrics. This is what really enables him to connect so well with an audience and really hold their attention at every show.⁠

His third single ‘Apple Tree’ will be released on 10th September. Listen to it via a private link here. ‘Apple Tree’ is a slightly more stripped back single compared to the last two, but it still leaves as much of a lasting impact on the listener. An acoustic guitar is paired with a subtle piano melody dancing throughout the background for most of the track, occasionally added to by an echoing guitar line. Conrad’s delicate, softly spoken vocals talk of a desire for the liberty to love whoever you please. A music video portraying this ideal has also been filmed, and will be released alongside the single.

Conrad says of the release: “I wrote the song overlooking Shibuya Crossing in Tokyo when I was 19 originally. Then when the love I guess it was about had expired, the friend who produced it was helping me get my shit together and we recorded it in a disgusting flat in Whitechapel. Then it kind of sat on a shelf a while. Then Paula [my girlfriend] heard it and was inspired to write the video which is about freedom. Freedom to love & hold any man or woman you see fit to regardless of religious & cultural backgrounds. The two dancers of the video inspired the story. One is a 30 something Maylasian guy who told us he could never admit to his parents he has married his partner, as even telling them he was gay required him to build a support system for them first. The other dancer is a black man who upon revealing to his mother his feelings towards men asked him if he was doing it for money. Neither feel they have been accepted, only tolerated. I was unaware that in London in 2020 (one of the most open and accepting places I've ever been) people are still feeling this level of shame & oppression from their own family, let alone the world around them for the love they hold in their hearts.”

Conrad is also an internationally acclaimed model, working with brands such as Ben Sherman, Pretty Green, Emporio Armani, Vivienne Westwood and many more.