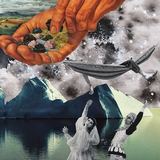 
Earlier this year, Cosmo released the Deluxe edition of his debut album, The Much Much How How and I via Transgressive Records which features a full instrumental version of the album - listen here.

Sheldrake has seen budding international success over the last several months thanks to an ear-grabbing synch for Apple’s new iPhone XR ad with his song “Come Along.” The single quickly hit #1 on Spotify’s US Viral chart, #2 on the US Shazam Chart with top 10 spots in the UK, Germany, Canada, Japan, Ireland, Russia and more! Looking beyond Come Along and the albums success Cosmo has readied two new compositions to be released on September 13th. Commenting on the two tracks Cosmo says:

“Orby is a track I I made as a birthday present for my friend Orban Wallace. I tried to design him a bespoke dance tune! It features Andrea Vargas singing a version of an old sacred harp song. It also features the sounds of me.. dropping a log off a bridge into a frozen pond, slowed down and played backwards!”

“Prefusify is a track I made with I was 18 (back in 2008). I had to wait a while to be able to release it (due to label politics), and it was one of the first tracks I ever put online. This one features many things including some mongolian throat singing!”

Cosmo will be on tour throughout 2019 in North America and then Japan before seeing out the year.


TOUR DATES:
23 Sep. at Songbyrd Music House in Washington, DC, US
24 Sep. at Johnny Brenda's in Philadelphia, PA, US
26 Sep. at Le Poisson Rouge in New York, NY, US
27 Sep. at Great Scott in Allston, MA, US
28 Sep. at Petit Campus Montreal in Montreal, QC, Canada
30 Sep. at Horseshoe Tavern in Toronto, ON, Canada
1 Oct. at Lincoln Hall in Chicago, IL, US
2 Oct. at 7th St Entry in Minneapolis, MN, US
4 Oct. at Larimer Lounge in Denver, CO, US
5 Oct. at Kilby Court in Salt Lake City, UT, US
7 Oct. at Chop Suey in Seattle, WA, US
8 Oct. at Fox Cabaret in Vancouver, BC, Canada
9 Oct. at Doug Fir Lounge in Portland, OR, US
11 Oct. at The Independent in San Francisco, CA, US
12 Oct. at CONSTELLATION ROOM in Santa Ana, CA, US
15 Oct. at Echoplex in Los Angeles, CA, US
29 Nov. at Daikanyama UNIT in Tokyo, Japan
1 Dec. at Compass in Osaka, Japan