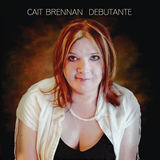 Debutante is the debut album from indie glam-rock revivalist Cait Brennan, released in early 2016. It's already on several critics' shortlist for best album of 2016. A sampling of reviews: "...Cait Brennan's Debutante is right up there with the great “drenched in blood, sweat & tears, leave everything on the table, conquer the world” albums like Against Me’s New Wave, Guns & Roses’ Appetite for Destruction, Green Day’s American Idiot and Smashing Pumpkins’ Gish."--Keith Creighton, Popdose "Glorious...From the crashing Pop thunder of “Good Morning And Goodnight” (think a desperate Harry Nilsson backed by a punkish ELO), to the White Album-era ballad of “Dear Arthur,” to the forlorn, Bowie-esque beauty of “Showman,” Debutante depicts an artist remarkably conversant with the last forty years of Pop, who is able to blend her influences and obsessions into one glimmering musical gem after another....Now that we have lost that glorious weirdo, David Bowie, it’s also nice to know that a new one, Cait Brennan, is hovering into view... which feels like a bit of solace for those of us who felt Bowie’s loss so keenly. In other words, it’s nice to have a new songwriter out there, who is so … out there!" --Peter Gerstenzang, American Songwriter "Seriously -- I know it's only February, but so far this is my candidate for Album of the Year." -- Steve Simels, PowerPop "With an undeniable gift for writing hooky delights, she’s an heir to the throne of the greats: ELO, Nilsson, the Sweet, Rundgren. Her influences are all over her songs and Debutante is a sparkly kaleidoscope of AM Radio, 1970s pop, and confessional lyrics. It’s delightful. Cait also has an one of the best pure rock voices you’re likely to hear. Marry that to an insane range and so-sweet-they-melt-in-your-ear harmonies, and then add them to the sundae of glorious melodies and whip-smart lyrics and you’ve got yourself a mixed metaphor. But you’ve also got a stunning debut. There’s not a filler track on Debutante. They’re all keepers.... “Meet Your Remaker/Harmony Lies” exists out of time; it’s anthemic, a linking arms and swaying song that bursts into the charging, charismatic “Harmony Lies,” with, of course, otherworldly harmony and smart, quite fun lyrics.... ...Debutante is one hell of a debut album. From the high fructose, upbeat balladry of “Once Upon A Nevermind” to the rich and soulful “Showman” (as a quick aside, you just don’t hear the word “defibrillators” enough in lyrics), Cait Brennan has made a glimmering record full of heart and hope and harmony. It’s a timeless album; joyful, clever, and wonderful. You owe it to yourself to hear her."--Melissa Bratcher, Popshifter “Debutante”’s opening salvo “Good Morning and Goodnight” manages to evoke Mott the Hoople, Queen, and Bowie in roughly equal measure (with a dash of “Walk Under Ladders”-era Armatrading). Second track “Underworld” is a Big Star homage as good as anything from Teenage Fanclub. These are pretty good signposts for the whole endeavor – lovingly crafted in the styles of classic glam and powerpop. There’s something defiantly uncool about this that really appeals to me." -ilovethesoundofguitars.com "Debutante” is a collection of easy-going, highly melodic power pop with strong harmonies sung with conviction. The album as a whole is an entertaining listen. It opens with “Good Morning, Good Morning,” a summery rocker that sounds like it should have been played on ‘70s radio alongside Fleetwood Mac, ELO or Supertramp. It has a decidedly retro feel, especially in the chorus. “Underworld” is another catchy acoustic rocker, this time with a bit of a Matthew Sweet vibe. “Dear Arthur” is a switch to a mellow acoustic guitar accompaniment for Brennan’s rich and emotional vocal....The album closes with the strongest track, “Black Diamond,” a stark acoustic and piano ballad with a gorgeous vocal by Brennan. It’s stirring and exquisitely beautiful. “Debutante” is a solid effort and worth picking up, for sure. Cait Brennan is a talent to watch."--Chris Gerard, Washington Blade " Debutante (is) a pleasurable pastiche of 1970s sounds coalesced into an impressive ode to a time when music was filled with grandeur, theatrics, and eternal hooks. It comes across as something of a period piece, and every song wears its influences on its sleeve....Of all the tracks, “Madame Pompadour” is the one that just stays in my head. Every song on the album has something to it that will stick with you, but this one shines a little brighter. First of all, there is a feeling of joy and all-out celebration, and the chorus is just catchy as hell. There are a lot of pop hits in waiting from Debutante, but this one is over the top in that regard. It’s a fascinating album, and this song is the jewel in the crown. Plus, with a crazy image-evoking title like “Madame Pompadour,” it has to be brilliant, doesn’t it now?" --Mitchell Hillman, Phoenix New Times Available worldwide via iTunes and Amazon,m, and at www.planetcait.com