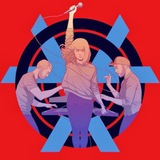 Where From: Glasgow, Scotland

CHVRCHES today announce the release of their new single Empty Threat, the latest track to be lifted from critically acclaimed and just-released second album Every Open Eye, which charted at #4 in the UK and #8 in the US, as well as the top 20 in ten other countries worldwide.

Every Open Eye is the follow up to CHVRCHES’ breakthrough debut album The Bones of What You Believe, released in autumn 2013 to widespread acclaim and selling over 500,000 copies. The Brit Award nominated band clocked in 364 shows in 2 years promoting their debut, selling out venues across the world and making signature appearances at SXSW (where they were awarded the inaugural prize for best new act in 2013), Glastonbury, Coachella, Lollapalooza, Reading & Leeds, and myriad others.

CHVRCHES this week began an extensive North American tour that runs through to 6 November, after which they tour the UK and Europe, concluding with their biggest headline show yet at London’s 10,000 capacity Alexandra Palace where they will be supported by very special guest Four Tet.
Live Dates: