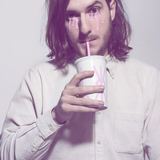 CLARENCE CLARITY MEADOW HOPPING, TRAFFIC STOPPING, DEATH SPLASH ホッピング草原、トラフィック停止、死亡スプラッシュ NEW TRACK. OUT 2ND MARCH 2015. BELLA UNION. “Clarence Clarity’s electro-soul sleaze is unlike much you’ll hear this year, or any other year for that matter… Think Michael Jackson trapped in the wiring of a dusty Sega Mega Drive." (NME) "… a unique approach to rhythm, combining squelchy, funk-dipped synths with crashing electronic beats and breathless, yearning vocals” Album To Hear in 2015 (Dazed & Confused) "… the new funkateer with the radical approach to rhythm and a messianic self-belief” (The Guardian, Band Of The Week) “Even with just a handful of songs to his name Clarity has been jolting systems with success of late.Clarity’s music is a glitching, unsettling combination of sleaze, funk, static and collapse, made all the more intense by the throbbing, eye-ache videos he makes as an accompaniment…stimulating, but also exhausting and bewildering:” (Guardian Guide) “Clarence Clarity is a true one off” (Clash) “He’s an enigma - a conjuror of freakish and impenetrable waves of sound that are both wildly disconcerting and bizarrely poppy." (DIY) DEBUT ALBUM NO NOW OUT 2ND MARCH 2015 CLARENCE CLARITY SUPPORTS JUNGLE ON TOUR: February 17 Pyramid Centre, Portsmouth 18 O2 Academy, Bristol 20 O2 Academy, Oxford 22 O2 Academy, Liverpool 25 The Liquid Room, Edinburgh 26 Albert Hall, Manchester 27 The Leadmill, Sheffield 28 Rock City, Nottingham March 02 Dome Corn Exchange, Brighton 03 Roundhouse, London 05 The Assembly, Leamington Spa 06 UEA, Norwich