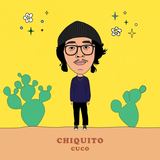 
Following the release of his Chiquito EP, Cuco is now releasing ‘Dontmakemefallinlove’ as a single from the EP. The single follows his debut festival performances at Coachella and Governor's Ball earlier this year with Lollapalooza, Osheaga, and Outside Lands still to come. Cuco will also be playing a series of dates across the US with Rex Orange County this summer and Kali Uchis in the autumn. He’ll also play his debut London show at Camden Assembly on September 18th 2018.
Find details about the Chiquito EP below.

Cuco, born Omar Banos, first began playing music at the age of 8 years old, at 16, Cuco was eager to start independently releasing his own music once finishing high school. In Summer of 2016, Cuco released his first mixtape Wannabewithu - a collection of teenage heartbreak over abstract chords, lo fi synths, ambient guitars, punchy drums, and lead trumpets that resonated with thousands of music lovers everywhere. Later at the top of 2017, Cuco welcomed his newfound fans with a follow up mixtape Songs4u. The release of his first bilingual track "Lo Que Siento" has moved the needle tremendously with over 3.5 million Spotify streams and counting.

"Cuco is the cariño of young Latinos who keep dreaming" - NPR

"poised to be one of this year's breakout stars" - Pigeons & Planes

"his songs are so relatable - they show and prove as opposed to telling...the 19-year-old rising star's music just connects" - The FADER