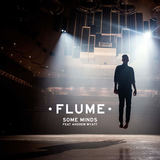 Artist Name: Flume Track Name: Some Minds feat. Andrew Wyatt Focus Date: 17th July 2015 Label: Transgressive Australia’s most accomplished young producer FLUME has just shared a new original work, 'Some Minds' via Transgressive Records. The epic track, which features Miike Snow’s Andrew Wyatt, marks an exciting new chapter for an artist who is committed to pushing himself and the boundaries of contemporary electronic music. "I started the instrumental at my apartment in Manly, Sydney - first working with the drums and arrangement, then building chords around it. I did some vocal bits as sketches before meeting up with Andrew Wyatt from Miike Snow in his studio in New York City. Andrew was writing things in his own head while I played the song over and over then after about an hour he jumped up and said, "stop" and launched into singing this amazing chorus melody. He was singing in jibberish into his phone, and then fleshed out the lyrics of the chorus and verses. I finished it off with the crazy ending further down the line, a few months later. On the first album I had only worked remotely with singers sending files back and forth over the Internet. I still enjoy working remotely but have also done a bunch of sessions with people in person. Sometimes it's odd, even uncomfortable, as writing is a very personal process for me. The session for 'Some Minds' with Andrew was one of the most natural I’ve done. He is a seasoned pro and really opened me up to this way of working. I am pretty hard on myself when it comes to being satisfied with new material, I am always trying to push myself. 'Some Minds' is a fully-fledged song, not just a track, which is what I was trying to achieve." The track is accompanied by an incredible video which premiered on Pitchfork today and is the result of a collaboration between Flume, the Sydney Opera House and respected director Clemens Habicht (Tame Impala, Bloc Party, The Presets). It features dance and choreography from Australian Ballet member Callum Linnane. Granted exclusive access to the iconic Australian building, the shoot took place throughout the night one Saturday in April. "The last four months have been the longest non-touring period I've had since the album came out a few years ago. I love travelling, but Sydney is my home. It was humbling to be able to make something in a building so iconic. Being inside the Sydney Opera House filming overnight with no one in the building was a real privilege - it has such a presence, so much character. The director Clemens really nailed the balance I wanted between the real and synthetic and he has a great eye. It's our love letter to Sydney." The premiere of ‘Some Minds’ coincides with Flume’s sold out, headline performances at Sydney Opera House’s Vivid Festival (part of FCX: 10 years of Future Classic) this week in Australia. Flume will spend the rest of 2015 touring internationally. See European tour dates below. EUROPEAN TOUR DATES Thursday 2 July | Rome, Italy | Rock In Roma (with The Chemical Brothers)  Friday 3 July | Amsterdam, Holland | Pitch Festival  Saturday 4 July | Gdynia, Poland | Open'er Festival  Sunday 5 July | Belfort, France | Eurokeenes Festival  Thursday 9 July | Lisbon, Portugal | NOS Alive Festival  Friday 10 July | Pont Du Gard, France | Lives AU Pont  Saturday 11 July | Paris, France | Peacock Festival  Thursday 16 July | Dour, Belgium | Dour Festival  Friday 17 July | Ferrapolis, Germany | Melt Festival  Saturday 18 July | London, United Kingdom | Lovebox Festival  Sunday 19 July | Carhaix, France | Les Vielles Charrues