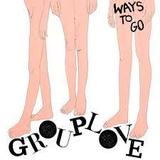 NEW SINGLE ‘WAYS TO GO’ OUT JANUARY 6 ALBUM SPREADING RUMOURS OUT FEBRUARY 17 ‘WAYS TO GO’ OFFICIAL VIDEO TWO SOLD-OUT LONDON SHOWS THIS MONTH BOSTON ARMS (NOV 22) // SLAUGHTERED LAMB (NOV 23) SUPPORTING IMAGINE DRAGONS AT BRIXTON ACADEMY ON NOVEMBER 26 LA-based collective Grouplove are pleased to announce details of their new single ‘Ways To Go’, which will release on January 6 via Canvasback/Atlantic Records. Their new album Spreading Rumours follows on February 17 and the band will also grace the UK this month for two intimate, sold-out London shows at the Boston Arms (Nov 22) and Slaughtered Lamb (Nov 23) as part of their international Seesaw Tour. They’re also main support to Imagine Dragons at Brixton Academy on November 26. Speaking about the forthcoming album, lead singler and guitarist Christian Zucconi says - "Ways to go is about self-discovery. Who am I? Where am I going? Are you coming with me? We are asking those big questions as we come into our own lives. Spreading Rumours as a whole is an album that was created from the energy of our live shows, captured in a 3 month stay at an old Motown house in LA. There's an anxiety and curiosity that comes with living on a tour bus with your band mates for 3 years, and all of that translated into the record. “ 2013 has certainly been a triumphant year for the band. They released their new album Spreading Rumours (produced by the band’s drummer Ryan Rabin) in the US this autumn, which peaked at #1 on iTunes’ alternative chart and reached top 10 in the albums chart. Grouplove recently performed their glistening anthems on huge US TV shows Jimmy Kimmel Live and The Tonight Show with Jay Leno, as well as landing themselves some nice acclaim from the likes of the LA Times. ’Ways To Go’ charted at #2 on the alternative radio chart in the US and the video has now amassed over 3 million YouTube hits! Furthermore, ‘Ways To Go’ was the most played track of the month on Australia’s huge radio station Triple J: Spreading Rumours was also made their ‘Album of the Week’. Since forming in 2009 after the band’s members met at an artist’s retreat on the Greek island of Crete, Grouplove have quickly become one of music’s most exhilarating young acts. The band’s debut album Never Trust A Happy Song released to acclaim in 2011, and for the past two years, they’ve been performing to sell-out crowds around the world. Previous UK festival dates include Glastonbury, Reading &Leeds and T in the Park. This is their first return to the UK since their debut album took off in the USA leading to rave reviews from performances at Coachella, Boonaroo and Lollapalooza, to name a few. Grouplove’s debut single ‘Colours’ set the mark for their energetic performances and dynamic sound. Their infectious follow-up single ‘Tongue Tied’ soared to #1 in the US and became the soundtrack to the global TV ad campaigns for Coca-Cola and iPod Touch. The song, which spent a whopping 43 weeks of Billboard’s alternative chart, has now sold over 1 million copies in the US alone. Grouplove is: Christian Zucconi (vocals, guitar), Hannah Hooper (vocals, keys), Sean Gadd (bass, vocals), Andrew Wessen (guitar, vocals), Ryan Rabin (drums).