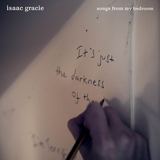 Artist: Isaac Gracie Track: Terrified Focus Date: 13th May 2016 Label: Virgin EMI Facebook: https://www.facebook.com/isaacgraciemusic Twitter: https://twitter.com/isaac_gracie EP Name: Songs From My Bedroom EP Release Date: 29th March 2016 Where From: Ealing Bio: Isaac Gracie is pleased to announce the release of a debut EP, Songs From My Bedroom, on the 29th March. A vinyl release will be available on the 13th May. 21-year-old British musician Isaac Gracie has the world at his feet. Growing up in Ealing, the son of poet, Judith Gracie, Isaac wrote his first songs at the age of fourteen. Inspired by familiar greats in the Buckleys, Radiohead, Leonard Cohen, and Bob Dylan, Isaac had an instinctive knack for writing a devastating melody, and a voice honed to precision. Studying English Literature and Creative Writing at the University of East Anglia, Isaac uploaded a self-produced Garageband demo to BBC Introducing in the Summer of 2015 (the latter day equivalent of farming out CD demos or MySpace links to ‘the industry’). The song in question was called Last Words, a dusty lament aided by the crackle and hiss of inexperience, and some 100,000 plays later (+ top spot on Spotify’s UK viral chart), its creator’s journey is about to get started. Since the Autumn, Isaac has become streetwise with support tours alongside The Japanese House and Blaenavon, and a first-on packed house at West London’s influential Blue Flowers night. The EP sounds exactly what it is, recorded at home with the same limited equipment that made Last Words such a moment, and with the same sense of tenderness and atmosphere. The years of choral practice instilled into that voice from an early age as a young member of Ealing’s Abbey Choir, resonates here with anxiety and wit. Never too much, never too forced. There’s emotion without the emoting. It’s the sound of a young artist with talent still raw, but what a talent it is. The EP features five such vulnerable laments. It’s fronted by Terrified, a song with the same immediacy as Last Words, a song that pushes Isaac’s vocal-take into the red, confiding and questioning with words of hesitancy and solace. An electric guitar and a broken voice. So simple, but so breathtaking. Over the course of the EP, you get a very real idea for who Isaac is, and ultimately where he will be going. His music sits in a league of its own, clearly distinct from the bursting stable of endless male artists. He’s the real deal. No question. Following an acclaimed spot at BBC Introducing’s SXSW showcase in Texas, Isaac Gracie headlines the Waiting Room in London on the 10th May. Live Dates: 30th March – Cadogan Hall, London (w/ Michael Kiwanuka) 18th April – Oslo, London (w/ Island) 30th April – Live At Leeds 10th May – Waiting Room, London (EP Release Show) 19th May – The Great Escape, Brighton