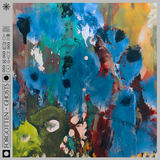 'Forgotten Ghosts' is Jadu Heart's most instant and accomplished moment to date, all swirlingly psychedelic electronics, gentle acoustic guitar, and hauntingly affecting vocals. Here is, says the band "a song about remembering people who meant so much in your past but have since become faded in your life.” Produced alongside Guy Sigsworth (Bjork, Robyn, Imogen Heap) - with whom Jadu Heart are putting the finishing touches on their debut album - 'Forgotten Ghosts' marks the masked duo creeping closer towards the spotlight in their own strange but beautiful manner.

Jadu Heart are creators of imaginative, cosmic pop which takes classic tropes (tripped-out psychedelia, introspective electronica, alternative folk and soul) and breathes completely fresh air into them. Having met whilst studying music, Diva and Alex formed the band in conjunction with a dizzying, extensive universe surrounding two supernatural characters, who have become as much a part of them as their own identities. Their alter-egos came to light in a world not unlike Earth (on the planet of Koshui, to be precise), when they found an abandoned temple deep inside a lush green forest. Here, they came across a golden MPC, which – upon being touched – transformed the pair into monsters: cursed, clawed, with black feathers and crystal faces. Each Jadu Heart release has followed the development of these characters, as the band themselves (musically, emotionally) have grown up too. “They were teenagers when they got cursed,” says Diva, “and now they’re settling a little bit.”

It’s this supernatural jump-off that gave Jadu Heart the confidence to explore those most raw human moments in their lyrics: the insecurities, fear and ugliness that makes monsters of us. With songs that are simultaneously intimate and cinematic, the band have quickly won an intrigued, impassioned audience totally independently – all without (as yet) even removing their characters’ masks. Yet it is through the lens of myth, storytelling and disguise that Diva and Alex have been able to be an honest as they have been about what makes them tick IRL. And on 'Forgotten Ghosts', Jadu Heart continue to reveal themselves as only they can.