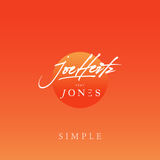 Brixton native Joe Hertz has steadily built his name as one of the UK’s finest producers. Continuing to rise in the world of electronica, he has proven himself capable of dabbling in hip-hop, R&B and house.

The in-demand producer and writer frequently has the best up-and-coming names passing through his studio, following the success of his huge hits “Stay Lost” featuring Amber-Simone and “Playing For You” featuring Bassette, that combine streams of over several million.

“Simple” follows Joe’s debut EP ‘How It Feels’ released in September 2016. The lead single “Playing For You” was heavily championed by BBC Radio 1, 1Xtra, Jamz Supernova, MistaJam and Toddla T. His diversity showcased across the 5 track EP left tastemaker sites like Pigeons and Planes, Clash Magazine, The 405, and Ear Milk yearning for more.

Usually found locked away in his studio crafting his signature sound, preparing his debut live show, or behind the decks flogging sweaty ravers to the dance-floor, Joe is fast becoming one of London’s most-watched producers. His early inspirations stem from teenage experiences at Drum & Bass raves, glitchy Electronic music in video games, and legendary behind- the-scene producers, such as Timberland and J Dilla.

Returning to 2017 with a string of collaborations under his belt, a debut live show at London’s KOKO alongside Shy Luv and a potential extended EP later this year, Joe Hertz is most certainly ready for the year ahead.