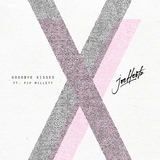 Having been hailed as “...one of the UK’s finest emerging producers” by Pigeons and Planes, Joe Hertz continues to defend that title, with more music and an extended EP to come later in the year, as well as the promise of a headline live show in London.

Usually found locked away in his studio crafting his signature sound, collaborating as a songwriter, or setting a party alight with his live set, Joe is separating himself from the pack and becoming one of London’s most original and best-loved producers, both in the UK and beyond. His early inspirations stem from teenage experiences at Drum & Bass raves, glitchy Electronic music in video games, and legendary behind-the-scene producers, such as Timberland and J Dilla.

After Joe’s debut release “At Your Touch” there was no stopping the young talent. With the likes of i-D, Pigeons and Planes, and more supporting, Hertz bolstered his reputation with a series of releases. Most notably, his most recent offerings “Playing For You” and “Simple.”

Showcasing true diversity with last year’s How I Feel EP, Hertz’s talents range from detailed R&B in "Playing For You", House-laden grooves with "Orbits", the rap-styling’s and laid back Hip-Hop sensibility of "Do Or Die", the opening electronic Soul odyssey of “Swimming”, and also the smooth soul-filled instrumental "At Dawn".