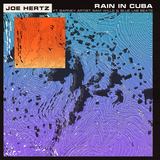 In the wake of his sold-out Asia tour and first offering of 2019 “Møøn”, Joe Hertz returns with a blissful new single, titled “Rain In Cuba.” Featuring Barney Artist, Sam Wills and Blue Lab Beats, the title of the single bears no implication on it’s sound; a pure, summer-tinged moment. Having established himself as one of London’s best young producers, Joe Hertz has been back in the studio with an outstanding array of talent and perfecting his ever-addictive trademark sound. A critically acclaimed tastemaker, the collaborations between Joe and his carefully selected vocalists is always seamless, and this new single is no different.
Speaking on working with Joe on the new single, Barney states:

"I’m really excited to get this tune out.. me and the boys were chatting about that awkward moment when you go on holibobs and argue with your Mrs.. and then made a tune about it.. hopefully this doesn’t happen to any couples this summertime! If it does.. you’ve got an anthem for the awkward silence”

"Barney and I have talked about getting in the studio for a while, and when Joe played us this instrumental he’d started with Blue Lab Beats, we were both feeling it straight away and began recording voice notes/writing down lyric ideas. They’d called the beat Rain In Cuba and we thought it was a strong starting point. I think it happens to a lot of us, where you go on a romantic holiday to get some space from the rest of the world, and end up falling out and arguing the whole time. I think you can hear all our individual influences on the track, but they blend together smoothly too."

Having grown up around iconic clubbing figures, (Joe’s father is legendary Electronic and Dance music champion Pete Tong), Joe enjoyed DJ’ing from an early age, sneaking into Fabric to take in jungle and DnB raves as a teenager. As well as being immersed in UK dance culture, Joe also had access to the latest Hip Hop and R&B records from the US at home, and quickly began to build his production skills, showing an incredibly rich awareness of a plethora of musical heritages. Applying a unique piece of London to every track, Joe developed his own unique sound - and one which is loved all over, with support rolling in from the likes of Complex, Wonderland, Nylon, Pigeons and Planes, FACT, Billboard, Beats 1, BBC Radio 1, BBC 1XTRA, Capital XTRA, Rinse FM and beyond.

With critics likening him to SG Lewis and Mura Masa, Joe’s output is has the ability to flood the airwaves, whilst also bearing the supremely credible stamp - with peers such as Murlo, Sega Bodega and more. With a true gift for predicting the hottest rising talent, Joe has always proved he’s one step ahead of the game - spotlighting artists on the rise and creating music that is totally contemporary soulful music that also shows a maturity that far exceeds his young years.

Having recently hit an awe-inspiring one million monthly listeners on Spotify, and being a regular in Apple’s top editorial playlists, Joe’s fanbase is rapidly expanding. Having just toured in Indonesia, Thailand, Japan, and South Korea -Joe is rewarding an ever-growing fanbase, with an ever-growing presence on the live scene.