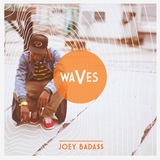 Joey Bada$$ - "Waves" released December 24th 2012 New York, New York - Joey Bada$$, a member of the burgeoning New York City-based rap crew Pro Era, is set to digitally release his song, “Waves”. An ode to teenage aspiration, "Waves"- one of the most uplifting singles from his critically-acclaimed mixtape1999 has had fans and music critics across the globe talking about the 17-year-old MC's uncanny talent and meaningful subject matter. 1999 was released earlier this year as a free download and fan response was immediate: without any promotion, by word-of-mouth the “Waves” video went into heavy rotation at MTV2; The New York Times described 1999 as, “casual in presentation but complex in execution, full of offhand assonance that’s hypnotic”; and the mixtape earned a BET Hip Hop Award nomination catapulting Joey to national attention. In early November, Joey Bada$$ performed the song on Late Night with Jimmy Fallon. Joey Bada$$ recently inked an innovative deal with Cinematic Music Group/Creative Control distributed by RED Distribution. With a reworked version of the sample originally featured in the mixtape version of the song, this release offers existing fans a new look at the track while introducing Joey Bada$$ to a whole new audience. In addition, the special release will include "Enter The Void", a brand new song from Joey produced by Lee Bannon with a feature from TDE's Ab-Soul. The two MCs trade bars of wisdom beyond their years over a slow soulful loop, offering their take on perceptive reality and inviting the listener into a spiritual journey. The digital release is an opportunity to introduce new listeners to Joey Bada$$ and his meaningful brand of Pro Era hip hop and for those that are already fans to experience his riveting collaboration with Ab-Soul. The singles can be bought together as a bonus for $1.29 per song or for $1.99 for both tracks (including the “Waves” video exclusively on iTunes) Joey Bada$$ has been drumming up serious excitement and discussions about his place in New York rap lore, drawing regular comparisons to greats like Nas, Biggie, and Big L. With his Pro Era crew, comprised of already buzzing Capital STEEZ, CJ Fly,Kirk Knight, and producer Chuck Strangers, Joey is leading one of the most compelling cultural movements to come out of NYC today. "If 2012 is Pro Era’s branding year, expect the future to only be brighter for a crew who intend to make the mecca of Hip-Hop their official stomping grounds," said The Source in a recent feature about Pro Era. Joey and Pro Era will be headlining New York’s Hot 97’s “Who’s Next” concert at SOB’s on November 20th and are gearing up for their first European tour with already sold out shows in all cities including London and Paris. In the spirit of staying true to their fanbase, Pro Era will release their next free tape on December 21st.