TUNE Kojey Radical - If Only 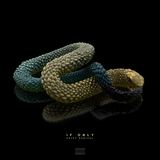 KOJEY RADICAL
Releases new single IF ONLY (produced by KZ)

KOJEY RADICAL returns with powerful new single IF ONLY, the first in a run of original new music planned for 2018

A striking statement of intent from the multi-discplinary creative, IF ONLY is a nod to the East London rapper’s darker side, paired with a ferocious delivery across subject matters which explore his journey through his creative process, and how he managed to deal with his demons along the way

Speaking on the track Kojey quotes Despite how easy it is to keep up appearances I struggled with depression heavily last year. I came out the other side more hungry and more passionate because the ability to create and express myself literally saved my life. This year I want to make the most empowering music about my sadness. I want people to not be afraid to feel. I want people to use my music as a safe place and feel energised. Some times being able to speak up can make all the difference"

Testament to Kojey’s previous singles “Gallons” + “After Winter, ‘If Only” lends itself to the level of depth and detail that we have come to expect with a Kojey Radical release and another reminder of his unapologetic lyricism. With production duties from KZ who delivers a rolling, menacing beat which compliments Kojey’s rasping tones, there is an intense urgency in his words...

"If only you knew, I’ve got flesh wounds bigger than you"

"If only you know, how much they pay for your silence"

Fast forward to 2018 with a live plot including Welcome to Wonderland, All Points East, Outlook + Bestival as well as partnering with the Jazz Cafe to present his own night ‘Endless’ (04.04): a night of live music and poetry featuring Ego Ella May, Mungon Cov, Bassette + Caleb Femi, expect a run of formidable new music + collaborations from this hotly tipped new artist.

Pigeons + Planes - 20 British Rappers to Listen to in 2018: 'Kojey Radical has a lot to say, and the confidence to say what he means. It’s a powerful combination'
Sunday Times Style Ones To Watch 2018: 'He’s the sort of rising star who does so many things we feel lazy just reading about him’
Independent Ones to Watch 2018: 'The British-Ghanian artist focuses his music on issues of race, class and self-identity; addressing them with as much careful'
consideration and depth as Kendrick Lamar on his incendiary record DAMN’
Guardian: ‘Sounding somewhere between Roots Manuva’s rasping theatricality and the sculptural minimalism of FKA twigs’
Fact: 'While most of the drill and grime scenes concerned themselves with beefing each other, Kojey Radical was beefing the entire system’
Line of Best Fit: ‘A revolutionary whose powerful testimony is a world away from the hypermasculinity of hip-hop today'