TUNE Mabel - Thinking Of You 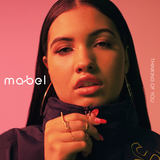 Mabel has unveiled new single ‘Thinking Of You’. This follows a breakout few months for Mabel, who was nominated for the BBC Sound Poll, Spotify’s Ones To Watch and the Blog Sound of 2016 after just two tracks: she has since collaborated with SBTRKT, toured with Years & Years (including Wembley Arena), and made her debut festival appearances at the likes of Glastonbury, Field Day and Great Escape. Following an ICA London show earlier this year, Mabel will announce details of her next headline date shortly.

Cool and effortlessly confident, ‘Thinking Of You’ draws intimately on those wider troubles of dealing with relationships when things are changing rapidly around you, a song about missing people and also home. In Mabel's words “relationships with cities are similar to relationships with people, being away from both can really make you appreciate what you have”. Equally as inspired by iconic 90s R&B – Destiny’s Child, Lauryn Hill – as the contemporary, soulful hip-hop of Drake. The results are Mabel’s most accomplished yet, and arrive after an intense period of writing, touring and self-discovery for the only-just-turned-twenty-year-old.

Unknowingly first glimpsed by many in a cameo for Skepta’s ‘Shutdown’ video, Mabel has since found her own voice as one of Pop’s most refreshing and positive new figures. Having learnt to play the piano aged five, music was undoubtedly in Mabel’s blood (as her family - patiently sitting through yet another DIY dance routine which she’d choreographed with her sister – could attest to). Moving between Malaga, Stockholm and London as a kid, Mabel resisted the call to her roots – musical, and cultural – for years: firstly, nobody at school would confess to a similar passion for R&B, and – she now describes - “in Sweden, there’s not actually a proper word for being mixed-race. People use the term ‘mulatto’, which is a mixture between a donkey and a horse.” Deciding to challenge both these things, Mabel quietly enrolled to study production and music theory at a college (previously attended by the likes of Robyn) and connected with Josh Crocker in Leeds to complete quickly-viral debut track ‘Know Me Better’ in secret.

In the build-up to ‘Thinking Of You’, Mabel was also recently commissioned to create a video project commemorating the opening of the new Tate Modern building: the subsequent film - soundtracked by the specially-written new track, ‘Talk About Forever’ – also fulfilled Mabel’s childhood-dream return to dance routines, in the psychedelic environment of Gustav Metzger’s ‘Liquid Crystal Environment’ installation. Finding her feet in the spotlight, you sense this won’t be the last full-circle ambition coming Mabel’s way in the months ahead.