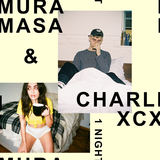 “A cut above” Guardian.

“It’s not difficult to imagine Mura Masa being one of our country’s next great artists” Noisey.

Mura Masa and Charli XCX have premiered new single '1 Night', which is available today through Mura Masa’s own imprint of Anchor Point (via Polydor/Interscope Records). With his debut album recently completed and due to be released this summer, a host of major festivals have also been confirmed; beginning with Coachella in April and followed by the likes of Field Day, Parklife, Wild Life, Lowlands and Rock Werchter (many more TBA). Mura Masa will additionally play a selection of US headline shows surrounding Coachella, before announcing further worldwide headline dates shortly.

'1 Night' is an instantly-infectious return from Mura Masa, colliding steel drums, marimba and off-kilter electronics into an anthem for friends who've crossed a line (but may yet be able to go back to how things were). Written alongside Charli XCX, '1 Night' brings together two of the most exciting innovators in modern pop, and introduces another surprise-guest for the still-just-20-year-old's keenly anticipated debut album.

It's been a journey of extremes even up until this point. Mura Masa grew up on the everybody-knows-everybody island of Guernsey, where his Mum’s Joni Mitchell records and his Dad’s years spent playing in hard rock bands around Scotland offered a dual influence of classic and experimental songwriting. With the nearest gig hotspot a 5-hour ferry journey away in Southampton, culture tended to be DIY out of necessity. But at the age of 15, Mura Masa discovered that electronic music was “a thing,” before stumbling into James Blake taught him “just how far you can go with it.” Then, the digging began. Inhaling entire discographies across Youtube and Soundcloud of songwriters and beat makers in these circles, he became immersed not just in the subcultures of electronic music but saw the bigger picture through which bedroom producers could shake the world.

In the couple of years since then, Mura Masa has been streamed over a staggering 200 million times (55 million alone on last single ‘Love$ick’), conquered the festival circuit, and sold out 3 headline European tours (at over 20,000 tickets, with London shows building from Electrowerkz and Village Underground to Shepherds Bush Empire). Having produced the opening track on Stormzy’s number-1-charting debut album, he has carefully curated collaborators of his own: ranging from breakout stars (Nao, Bonzai) to the scene's biggest names (A$AP Rocky, Charli XCX). Everything has been done Mura Masa's way, and at his own pace: from establishing his own label, Anchor Point, in which to also develop new artists, to launching a mixtape series (AP Sound) and radio shows. Mura Masa's debut album will dig deeper still into a richly varied mix of sounds and guests, further seeking to twist popular music into a mirror of youth culture, and blurring the underground with the orthodox. Look out for further details coming soon.