TUNE Mura Masa - All Around The World ft. Desiigner 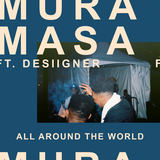 “A cut above” Guardian

Mura Masa has unveiled new single ‘All Around The World’ (ft. Desiigner), which first aired as Radio 1’s Hottest Record in The World and is available now via his own imprint of Anchor Point (via Polydor/Interscope Records). ‘All Around The World’ is the next taste of Mura Masa’s much-anticipated, self-titled debut album, which will see a release on July 14th and also includes recent single ‘1 Night’ (ft. Charli XCX). Having been nominated for his first Ivor Novello Award and added to an extensive run of summer festivals, Mura Masa’s autumn headline tour – featuring his biggest headline show to date at Brixton Academy – is on sale now.

‘All Around The World’ is another wildcard from Mura Masa, first teased during a breakout appearance at Coachella in which Desiigner joined Alex on stage to perform the song (and meet in-person) for the first time.
“We were trying to get the lyrics from him for ‘All Around The World’,” recalls Alex, “and even Desiigner doesn’t know what it was that he sang on the record, because he didn’t write it down and was just in the moment.” The result, ‘All Around the World’, is a thrilling highlight on an ever-surprising debut album, recorded alongside an extraordinarily diverse cast-list: ranging from Damon Albarn, Christine & The Queens and Charli XCX to A$AP Rocky, Jamie Lidell, A. K. Paul, and affiliates of Alex’s own Anchor Point family (like Nao, Bonzai and Tom Tripp). In and amongst all that, musically you’re as likely to find Prince-style wired funk sitting next to trap as you are tropical-inflected house and acoustic balladry. It’s singularly Mura Masa’s vision of what pop music (and modern British culture) should look like in 2017. Even the artwork rejects the idea of running to the page, or living in a box.

‘All Around The World’ joins acclaimed early singles ‘Firefly’, ‘What If I Go?’, ‘Love$ick’ and ‘1 Night’, on a record which captures – says Alex - “the confusion and chaos of being 20 and living in London for the first time.” The trial and errors of youth are all here, but drawn together by the importance of togetherness, and the challenge to connect (however isolated your upbringing, messy your love life, or busy your city). Digging into a dizzying array of musical subcultures, at the centre of it all is a young Guernsey singer and producer barely out of his teens, whose hard work and innate curiosity has led to the point of curating an album alongside lifelong heroes, cult figures, and emerging talent. The results are a work of coherence, variety, and vitality – it is, quite simply, ‘Mura Masa’.