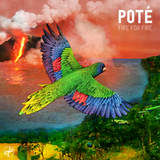 St Lucian born, London based artist Poté follows recent EP, ‘Over The Water’ — an EP anchored in his experiences of journeying to London as a child — with bold new four-tracker, ’Fire For Fire’.

Although making his name as a maverick club producer on labels like Portuguese indie gi-ants, Enchufada, Poté’s recent output has seen him find his voice as an artist in his own right. Experimenting with lyricism, self-recorded vocals and live instrumentation, ‘Over The Water’ offered a window into the development of a maturing, firmly idiosyncratic sound.

New EP, ‘Fire For Fire’, which features an eye-catching collaboration with rising star Kojey Radical on the title track, continues along a similar theme, only this time journeying further into Poté’s vision for his music.

Opener ‘Before The Light’, featuring hazy, faded vocals from Carmody, is an immediate case in point, a track defined by leftish textures, glistening orchestral interludes and spo-radic, pounding drumbeats. Kojey Radical sparkles on ‘Fire For Fire’, again tapping into a similar sound aesthetic where Poté’s drums, although still a core element of his music, are used skilfully — to enhance rather than dominate.

‘Egosurf’, featuring his own recorded vocals (as with ‘Fire For Fire’), and ‘Last Hour’ both mark further steps into new territory too, demonstrating not only a flair for one-of-a-kind sound design, but also versatility — a key face of Poté’s make up that will see him tour ‘Fire For Fire’ as part of a series of live shows in 2017.

“The EP speaks on the immense battle between following your own advice versus your urges”, explains Poté. “Ultimately it's a battle between your heart and brain, fighting fire with fire.”
Tracklist