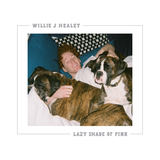 Willie J Healey has premiered new single 'Lazy Shade of Pink', which is released today via National Anthem / Columbia Records. This follows recent single 'Greys', which was playlisted at 6Music and picked up support across the board at Radio 1, Radio X, Amazing Radio and saw the young Oxford native tour with the likes of Palace (including Shepherd's Bush Empire), Sundara Karma, and Hinds. An intimate run of dates – including an immediately-sold-out Oxford show and Sebright Arms on June 12th - has also been confirmed, whilst early festival dates for the summer include The Great Escape, Dot to Dot and Truck Festival.

At a time when the indie landscape seems weighed down by its own past, Willie J Healey’s idiosyncratic alternative-pop seems curiously invigorating and subversive. The 22-year-old singer and DIY-producer has cut an exciting path with his unpretentious songwriting: his artful approach to his craft aiming towards heroes like The Modern Lovers, Bruce Springsteen and Modest Mouse, but far from being an obvious pastiche , Healey’s evolution over the last couple of years has seen him find a distinctly refreshing, occasionally-eccentric musical voice. 'Lazy Shade of Pink' is the latest offering from Willie's recently-completed debut album, with the track - says Willie - "written a while ago, and recorded at my house. I've always wanted to have a song with a drum solo in it."

The results feel warmly familiar and strikingly relevant in their celebration of youth, and the modern problems of young manhood; of isolation, the misfit, and escape. Willie started writing songs in earnest having left college, when he worked for his dad as a plasterer for a couple of years whilst travelling around his everybody-knows-everybody town in a battered old limo by way of eye-catching transportation. Yet it’s a sound which is suitably panoramic, and pan-Atlantic: equal inspiration comes from cult film classics, The Girl Next Door, and subverting small-town tedium into wry and charismatic lyricism. It’s true to himself, constructed by himself, and mostly for himself, but it’s a sound that Willie JHealey looks set to drive further forward still.