TUNE Loaver - Forget All About 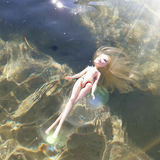 Malmö, Sweden, based singer-songwriter Linnea Hall started her solo project Loaver with a desire to be able to showcase all sides of her experiences and inspirations. On October 30th, debut album 'Fern' is released via Rama Lama Records. 'Forget All About' is the third single to come from the album and is released on September 4th.

In 2019, she put out her self-titled debut EP on Birds Records. The music – experimental, smooth and dark pop at its finest – was written and recorded in Italy during 2017, in close collaboration with artists such as Giovanni Ferrario (PJ Harvey, John Parish etc.), who produced the tracks, and Emanuele Maniscalco. Through the six tracks we were drawn between the uttermost boundaries of emotions – love, hate, dreams, doubt, chaos and naivety. The new record is once again recorded in Italy but this time in collaboration with Emanuele Maniscalco and Carlo Poddighe.

Loaver on Forget All About: "I wrote Forget All About with Emanuele (Maniscalco) in Italy last spring. It was a time when nothing seemed to be right. I guess it’s a song about the abrupt changes that arose in the gap between what was gone but at home and the present absence, or perhaps it was the other way around. The horses ran astray in the city. "

Early 2020, Loaver returned with new single 'Drömmeri (om döden)' on Rama Lama Records (Melby, Chez Ali, Julia Rakel, Steve Buscemi's Dreamy Eyes). The single, a pendant to Debussy's Reverie, is a memoriam to Linnea's grandmother that was released on her death day. This was the first taste of the upcoming album that's packed with highly unique and instantly memorable tracks, like the slow burner 'Bloom With Me', the shapeshifting 'Forget All About' and captivating 'Apart'.

Besides Loaver, Linnea Hall is the singer of Swedish experimental indie rock group Kluster B. The band have put out two records since 2018 that besides positive reviews in some of Sweden's biggest music magazines, have received international attention from Line of Best Fit, BBC Radio 6, NBHAP and more, with The Revue calling them one of the most innovative bands in the world as well as opened for Frankie Cosmos, Omni and more.

'Fern' is out October 30th on all platforms and limited vinyl available both on black and transparent 12'', pre-order is available at ramalama.rocks. Linnea Hall is available for interviews.