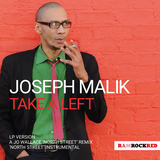 Ramrock Red Records are so proud to present the first single release ‘Take A Left’ unleashed from internationally acclaimed vocalist/producer/DJ Joseph Malik’s forthcoming album, ‘Diverse Part 2’. Co-written and produced with Joseph’s long-term friend + DJ partner since the 80’s, Saleem Andrew McGroarty aka Sound Signals, ‘Take A Left’ is a stomping RnB monster of epic proportions that would be at home in a 1950’s juke joint from across the tracks to a present day shebeen in a dingy basement club. Drawing their inspiration from the darkest recesses of the musical repertoire of Dr. John, Muddy Waters, Allen Toussaint and a generation of blues artists who travelled alone with their guitars in a gunny sack along lonely back roads in the pale Delta moonlight, Joseph and Saleem, along with a stellar line up of Scottish musicians, have created something akin to musical redemption. Ramrock Red Records boss, Jo Wallace gives ‘Take A Left’ an additional remix by taking Joseph’s impromptu jam from the front porch of a wooden cabin, along an echoing corridor and into the confines of a compact Bayou studio….you will sense the darkness but surely see the light.

Joseph Malik has always had a great ear for finding artists to work with on his projects and on ‘Take a Left’, he has teamed up with Scotland’s finest soul brothers and sisters to provide the soul power to help him complete his mission to record the best in Soul, Jazz and Blues music. With Joseph on lead vocals, backing vocals are provided by Polish vocalist/ Malik Orchestra violinist, Dominika Czerniga, now based in the South Side of Edinburgh and renowned for her powerful vocal delivery with an impressive operatic range. Malik says of Australian jazz trombonist Chris Greive, ‘we would never dare sample a horn from a record when the world’s best lives just around the corner!’ and along with the harp man from Edinburgh’s premier blues band, ‘Black Diamond Express’ and musical enigma, Tom McClelland, they create a relentless melody that drives the track as they let the notes interweave, cemented by Kris Howden, one of the South Side’s soul brothers + a major player on Edinburgh’s live music scene, with his big, fat, nasty bass line. Recorded at Rusty’s Yard in Edinburgh’s Easter Road by ex-drummer & founding member of Edinburgh’s punk band ‘The Fire Engines’, Rusty Burn on the recording desk, and mixed down by Saleem Andrew McGroarty for Sound Signals at The Sound Still, Leith, the end result feels more like a session straight out of the Stax or Atlantic studios – ‘Take A Left’ will lead you straight onto the talced dance floor.

Joseph Malik’s first forays into music began when he started collecting records at 7 years old, buying vinyl from his local record shop in Glasgow’s West End. By the late 1970’s, he was 14 and DJ’ing at parties, breakdancing at the Plaza Ballroom with his older cousin’s crew ‘Glasgow City Breakers’ and working at the Sub Club as a glass collector and flyer boy. But, by his late teens he’d grown weary of Glasgow’s violent backdrop of race hate and moved around from Manchester hanging out at the iconic Hacienda night club then down to London, watching Jah Shaka before eventually ending up in Edinburgh where he felt at home in the accommodating, multicultural city. Joseph began honing his production skills as a DJ/co-producer as part of Scotland’s foremost hip hop group, ‘Black’anized’, going under the code name ‘M.F Outa ‘National’ and together with longtime friend + DJ/producer, Saleem Andrew McGroarty aka ‘Awunsounds’, he recorded the ground breaking ‘Miles Out Of Time’ which was included on the ‘Headz’ album. This was just the beginning of an extraordinarily, illustrious musical career that has spanned more than 30 years with Joseph Malik refusing to be stereotyped. Highlights include his vocal delivery on Rainer Trüby’s Trio seminal ‘High Jazz’ which resulted in a great friendship with Rainer who was instrumental in landing Joseph’s recording contract with German label, Compost on which he released his milestone, post club classic LP ‘Diverse’ to critical acclaim from his peers including Gilles Peterson and Norman Jay. Selling more than 80,000 copies of ‘Diverse’, success continued for Joseph - touring with Terry Callier, releasing a double album on the Stereo MCs ‘Response’ label, writing his 1st hit record ‘Crack Pipe’, working on hip hop, techno and Drum + Bass productions with luminaries such as Drumagick, Grand Unified, Darren Emerson, Fred Everything and Kruder & Dorfmeister, a remix album with Aqua Bassino and Grand Unified on remix duties and currently, his work ethic is as relentless as it was in the 80’s; his dedication to his music is intense and passionate. For the last 2 years, Joseph has been working closely with friends of 30 years and his inspiration to sing, David Donnelly and Steven Christie along with Saleem Andrew McGroarty on ‘Diverse Part 2’ – a ‘heads down’, studio/songwriting album project that is, quite simply, spine tingling. Due for release in August on digital and September/October 2018 on vinyl on Ramrock Red Records.