TUNE Out of the Ordinary - Meadows - Cafe Graffiti Mix 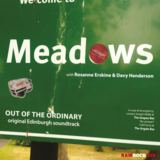 Ladies and Gentlemen, Ramrock Red Records are proud to present the all-star Edinburgh collective ‘Out of The Ordinary’ with their first single 'Meadows' from the forthcoming LP ‘Stranger Things Have Happened’.

After the phenomenal success of his solo album ‘Diverse Part 2’ in 2018, Joseph Malik decided to sit firmly in the producer’s chair and team up once again with the co-writers and production ‘dream’ team of arranger/producer Chris Greive, fellow producers Saleem Andrew McGroarty and David Donnelly to create ‘Meadows’, an open love letter to Edinburgh, the city they all love. It’s an anthem for well-being that embraces all races, all creeds, all colours, all genders and where Joseph shares his experience of homelessness and salvation. 'Meadows' contains the iconic hook from Jefferson Airplane's 'Today' and it was a joy to get the original song writers blessing to create a re-interpretation for their anthem of unity.

Joseph knew deep down in his heart ‘Meadows’ had to be a duet but he did not want to sing on the track. So he called upon Ms Rosanne Erskine from Coco & The Bean and indie legend, favoured John Peel Sessions guest, and member of the 'Fire Engines', Davy Henderson. The resulting EP is nothing short of magnificent. The LP & ‘Café Graffiti’ versions are arranged by Chris Greive who crafted the soaring, live strings, played by violinist & Grit Orchestra founder, Greg Lawson whose improvisation has become another instrumental colour within the track. Along with trumpeter Colin Steele and 'The Proclaimers' keyboardist Steven Christie, a sound comparable to the golden era of ’66 Haight-Ashbury folk-psyche fusion was created. With the ‘North Street’ Vocal remix + Dub, Darren Morris and Jo Wallace take the progressive rock element and run with it. The fuzzed up Rhodes + Mellotron of Darren Morris’s keyboards, the mesmerising ‘electrified strings’ of Greg Lawson and the hypnotic repetition of Davy Henderson’s ‘there’s no evil’ vocal hook take you on a trip into an uncharted universe…..in addition to the 4 mixes on vinyl, the digital release also has the ‘North Street’ Dub, Gospel Mix and ‘North Street’ instrumental.

“It was April and it was getting warmer and I woke one morning in the ‘Meadows’ in Edinburgh. The sounds of the trees, leaves and birds filled my head and in that moment as the sun was coming up, the guitar hook from ‘Today’ came into my head inspiring me to bring the city together in unity”.

Fellow ‘Fire Engines’ member, Russell Burn opened his studio to us even when times were tough. Every week the musicians gathered at Rusty’s studio in Easter Road to create ‘Meadows’ and the forthcoming album 'Stranger Things Have Happened'. The final recordings were taken to the new Silverback Lodge studio, just near The Meadows, for 'Out of the Ordinary' to mix the song in the location where it was written.

In a time when the city’s arts and music venues are closing down, the project bonds three generations of musicians who bring the sound of the city together - the journey for ‘Out of the Ordinary’ has only just begun…..