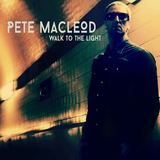 Pete MacLeod is a Scottish singer-songwriter with a flair for crafting hard edged yet sensitive and melodic guitar based rock tunes. Raised in the small mining town of Coatbridge (just outside Glasgow), his early influences were drawn from his father’s record collection, including the likes of Buddy Holly, The Beatles, John Lennon and The Rolling Stones. He spent several years living in California before returning to Scotland to release an EP entitled ‘Glasgow Keeps Me Real, California Lets Me Heal’ in early 2013. It was well received and the song 'Rolling Stone' was made Single of the Month on BBC Radio Scotland.

‘Crestfallen’ was championed by the BBC, with the title song receiving multiple spins on Radio 2 and an exclusive session recorded for Radio Scotland. MacLeod promoted the album with a series of tours in support of Happy Mondays, The Jesus And Mary Chain, Cast, Ocean Colour Scene, Shed Seven, Midge Ure, Amy Macdonald and The Strypes. He has also been joined on stage by musicians such as Steve Craddock (Ocean Colour Scene, Paul Weller, The Specials), Bonehead (Oasis), Rab Allan (Glasvegas) and Josh McClorey (The Strypes).

MacLeod recently completed his third solo album, ‘Walk To The Light’, which will be released in the autumn of 2018. With production assistance from Youth (who also plays bass on several songs), it once again features contributions from Simon Tong and James McCartney, as well as Andy Bell (Ride, Oasis, Beady Eye) on the elegiac album closer ‘Saudade’. Other album highlights include the upbeat, almost funky ‘I Need Your Love’, which radiates positive energy and emotion, the warm and highly melodic ‘California Son’ and the reflective, spiritual title song.

Describing the lyrical content of the record, MacLeod states : “I went a little deeper and darker with some of the songs, although the emphasis is more a spiritual one in regard to the overall feel. My belief is that no matter what you are going through it's important not to doubt yourself and others but instead ‘walk to the light’. Get through the tunnel. Take it all in and not be frightened of what may lie ahead. We will all leave here one day and also lose others while we are here, but my attitude is that I welcome the experiences I've had. I also welcome the unknown and the overall journey!”