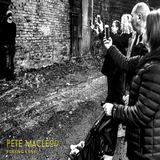 Singer-songwriter Pete MacLeod will release a brand new non-album single entitled ‘Firing Line’ on 1st March.
A stripped back yet bright, full sounding song, MacLeod states that “it is about today’s society with smart phones, social media and the unfortunate consistency of everyone feeling like they have to comment, judge and have an opinion on absolutely everything and the judgement of each other within this process. Also the uncertainty of where we all stand as a result of this today. Is it better for us to live this way? The artwork for the song also portrays this and fits perfectly. We are all part of this firing line whether we choose to be or not.”

Pete MacLeod grew up in the small mining town of Coatbridge (just outside Glasgow), but spent several years living in California before returning to Scotland in 2013. His debut EP, ‘Glasgow Keeps Me Real, California Lets Me Heal’, was made Single of the Month on BBC Radio Scotland, following which Creation Records founder Alan McGee signed him to his newly launched 359 Music label and released his debut album, ‘Rolling Stone’. Its 2016 follow-up ‘Crestfallen’ saw MacLeod working with producer Youth (The Verve, Primal Scream, Pink Floyd, Crowded House) as well as guitarists Simon Tong (The Verve, Gorillaz) and James McCartney (solo artist and son of Paul). Its title song received multiple plays on the BBC, while MacLeod promoted the album
with a series of tours opening for Happy Mondays, The Jesus And Mary Chain, Shed Seven, Ocean Colour Scene, Cast, Midge Ure, Amy Macdonald and The Strypes.

MacLeod’s recently released third album, ‘Walk To The Light’, again features production by Youth (who also plays bass on several songs) and contributions from Simon Tong and James McCartney, plus Andy Bell (Ride, Oasis, Beady Eye) on the elegiac album closer ‘Saudade’. Other album highlights include the upbeat, funky ‘I Need Your Love’, the warm and melodic
‘California Son’ and the reflective, spiritual title song.