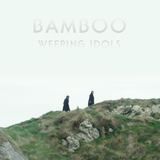 The first single, “Weeping Idols”, launches the album in fine style and looks set to continue the trajectory for this fascinating outfit who have had previous support from the likes of Marc Riley, Tom Ravenscroft, Gideon Coe, Noisey, Fact, Record Collector and more.

The new album was written and recorded over a two year period where ideas and arrangements were allowed to slow-cook and develop over time, in contrast with the last album "The Dragon Flies Away" (2017), which came together relatively quickly for the duo. The music comprises the usual (for Bamboo) mix of Horwood's flawlessly resonant folk cadence and Carlisle's pristine synth production, whilst TR808 drum machines and samples lock together with acoustic drums, themselves often given the "Tony Visconti" Eventide Harmoniser treatment of Berlin-era Bowie albums. Ancient ARP synthesisers and Mellotron flutes and horns sit next to contemporary digital sounds and samples in a hauntological tapestry over which Horwood can intone her sometimes mournful, often uplifting vocals.

"Weeping Idols" reflects upon a recurring theme of religious dogma and spiritual entrapment, and is accompanied by a forthcoming video shot by Jack Barraclough (Orielles, Rozi Plain) around the North Coast of Northern Ireland, taking in the Giant's Causeway and the Kinbane Castle ruin. Carlisle's infectiously colourful synth riffs and pop production, featuring sun-burst harp playing from Brighton-based singer/multi-instrumentalist Emma Gatrill, contrasts sharply with the darker tone of Horwood's lyric, jarring in a way reminiscent of "You Have Placed A Chill On My Heart" by The Eurythmics.

Although "Daughters Of The Sky" breaks away from the storybook concept format of The Dragon Flies Away, in that sense being more similar to Bamboo's debut album "Prince Pansori Priestess" (2015, ★★★★★ - Record Collector Magazine), there are still recurrent themes that run through the album such as motherhood, the cyclical nature of life, emancipation and liberation.