Back to Burning House's Music <
Single 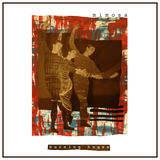 Mimosa / If You Won't

Hailing from Southampton, Burning House have earned a reputation for generating chaos and euphoria; a performance for the end of time. They generate compelling, adventurous songs, inspired by the hallmarks of the shoegaze genre while venturing far beyond; early supporters include the likes of Steve Lamacq, to add to a growing fanbase for both their releases and live shows (including support slots for high profile acts including Wire and Moon Duo). “Mimosa”/”If You Won’t” is the first release for the outfit since signing to Yumi And The Weather’s label, MIOHMI, and their eagerly awaited full debut album follows on the imprint in summer 2019. Kicking off with a tense, whirring intro, the A-side explodes into a raucous grunge atmosphere of bass heavy suction and earthy, grounding riffs. The immersive original version, clocking up almost seven minutes, is joined on the promo package by an impactful radio edit. Aaron Mills – the band's guitarist, singer and songwriter - explains the inspiration behind the track: “It’s a song about the fall of an empire. I wrote it as a big, self-conscious, opening rock song - the kind that would fill a stadium, but retaining ethereality; sonically a fusing of yin and yang/masculine and feminine. Lyrically, the song takes on themes of isolation, but also risk - the idea that risk is the only cure for isolation and despair. I was inspired by reading Dr Faustus by Christopher Marlowe, and I learned about how one can hypnotise through consistency and repetition, and then all of a sudden break the “spell” to dramatic effect.” AA-side ‘If You Won’t’ centres around the dual guitar and sequenced flute of the chorus and shows off Mills’ pop-influenced earworm skills, combining Burning House’s trademark wall of thick guitar sounds with the softer emotional side conveyed in the vocals. “The song is about distance and longing. Love as a kind of paradox… absence making the heart grow fonder… the imagining of what might be, though doubting it possible in this world. The lyrics are deliberately vague as it’s more about what isn’t being said, and dare not be spoken. Often what we want to convey can only drown out the pure vulnerability of the consecrated moment and the music is trying to transport you to that place, within the chimes and elastic guitar motifs” – Aaron Mills. Fuelled with emotion and bouts of nostalgia alongside instrumentation of epic proportions, Burning House’s full album is due in early Summer and is set to build on a promising swell of support and recognition over the last few years. After gingerly approaching BBC 6Music’s indie doyen Steve Lamacq with an early 4 track demo, the band found themselves slotted into the playlist of his 6Music Recommends new music show. Their music has also made its way into the ears of Wire’s Colin Newman, who found in them a sonic kinship. Subsequently Burning House were invited to open for Wire at the Con Club in Lewes. The trio’s euphoric sound has also led to shows all over the south coast with Moon Duo, Shonen Knife, Is Bliss and Kagoule. Burning House Are: Aaron Mills: Guitar / Vocals Patrick White: Bass Guitar Dominic Taylor: Drums