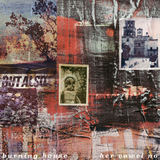 “Her Vowel No” is the next single to be unleashed from the ‘Anthropocene’ album by Burning House. The Southampton outfit released their gripping debut LP in July via MIOHMI records (the label co-founded by Yumi And The Weather’s Ruby Taylor), their immersive and stirring, noise-laced shoegaze/alt-rock sound gaining support from the likes of John Kennedy (Radio X), Steve Lamacq (BBC 6Music), BBC Solent, Echoes & Dust, Louder Than War, The Big Takeover, and beyond.

Enveloped in cosmic noise and buzz-saw guitar riffs, “Her Vowel No” sees the band leaning into a headwind of chaos, on a track that melds influences including Trail Of Dead and ‘90s shoegazers Swirlies. Arresting, propulsive and with an unshakable hook snaking right through it, this song punched its way up through the epic, noise-driven haze of the album to demand its place as a showcase track.

Burning House have earned a reputation for generating chaos and euphoria; a performance for the end of time. Their compelling songs are inspired by the hallmarks of shoegaze while venturing far beyond. Their album builds on a few years of buzz at online press and tastemaker radio, as well as in the live sphere where they have opened for the likes of Wire, Moon Duo, Shonen Knife and more.

Founded by songwriter, guitarist and frontman Aaron Mills, the band coalesced into its current formation with the addition of bassist Patrick White and more recently drummer Dominic Taylor. Mills and White’s shared penchant, for the combination of pop melody with high art concept, is turbo-charged by Taylor’s background in punk and grunge music, making for an intimate yet visceral experience; raw and comforting in equal measure, and all the more absorbing for its emotional ambiguity. Mills’ vocals are often cradled low in the mix, their textural nuance and lyrical fervour somehow amplified when glimpsed through the chaos of noisy fuzz, juggernaut riffs and punchy drums.

On their live dates, Burning House are now augmented on guitar and keys by Ruby Taylor, an acclaimed musician under her Yumi And The Weather guise and co-founder of MIOHMI records.