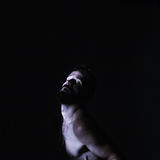 UK rapper, social activist, producer and spoken word artist Dizraeli, has released his new single ‘My Mama’ in July ahead of UK support dates for influential hip hop duo Blackalicious. The track is the third instalment from his upcoming album, ‘The Unmaster’, due for release in September.

Authentic, autobiographical and unwaveringly honest, ‘My Mama’, was written by the artist as a healing spell for his own mother, during the time she was hospitalised and confined to a wheelchair after a serious accident. Musically inspired by both the ceremonial music Dizraeli witnessed while studying percussion in Senegal and the Boom Bap beats of 90s hip-hop, the single is another example of the complex sound contaminations included in the multi-faceted artist’s new body of work.

Channelling from Fela Kuti to Sampha, Dizraeli’s use of his own vocal range over the track, doesn’t just show his talent as a writer and producer, but his knowledge of the human voice as an instrument. Incorporating a soaring falsetto with distinctive live percussion and booming basslines, the multi-instrumentalist builds a moving chorus from his own wordless chanting.

Having composed the soundtrack for the E4 drama Tripped, and won the BBC Poetry Slam Championship, Dizraeli is also known for his work with spoken word artists Kate Tempest and Scroobius Pip. His previous music has seen support from the likes of The Skinny, Evening Standard, Songlines and Pop Matters, with plays across all BBC Radio stations. He is also a rising radio presenter, hosting his own monthly show on Soho Radio, and recently travelling to Mongolia to present a BBC World Service documentary on the hip hop pioneers of Ulaanbaatar.

Dizraeli’s forthcoming album ‘The Unmaster’ was recorded and completed over a period of two years, during which he experienced a mental meltdown, and funded thanks to a successful Indiegogo crowdfunding campaign. The artist recently opened up about his personal struggle in interviews with Metro’s podcast ‘Mentally Yours’ and The Book of Man.

With live performances already confirmed over the summer at Knockengorroch Festival in Scotland, London’s Woodburner, Boomtown Fair, Larmer Tree, Shambala – as well as a support tour with hip hop legends Blackalicious - before his new album ‘The Unmaster’ drops in September, ‘My Mama’ will cement Dizraeli as one of the most critical voices in UK hip hop.