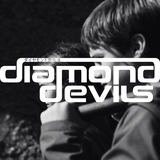 GEIZ follows up emphatic debut track “Call of the Void” with another heavyweight slice of searching, adventurous alternative pop music on the new single “Diamond Devils”, out 25th October.

This luminous cut brings a continued exploration of underground club sounds, channelling a wildly experimental and curious nature through the prism of pop. A seasoned – but elusive – writer, producer, singer and multi-instrumentalist, with this second release GEIZ adds another intriguing twist to the tale, following a flurry of early high profile support from the likes of Lauren Laverne and Amy Lamé on BBC 6Music, John Kennedy (Radio X), CMU, and beyond.

On “Diamond Devils”, a suspenseful and pulsating, psychedelic chime-studded synth-scape sets the scene for a bittersweet observation of glorious potential wasted. As the lyric pits light against shade, a tripped-out trapdoor leads from a land of wavy and colourful future R&B, through flashes of freak-folk, to a kaleidoscopic jungle of heavily treated guitar licks dripping with the influence of French disco.

Translating as meanness or greed in German, the GEIZ moniker represents, in the artist’s own words, “The greed that we feel when music gives us a feeling we can't get enough of. That urge to replay a song for the fourth time in a row. With this project more than anything else I want to create exactly that feeling. Music that is undeniably satisfying regardless of what genre it is in.

“Being a fan of all music and easily excited by all genres, I can't help but try to use what I like from the most obscure stuff in what I write. I believe one of pop music's jobs is to curate the underground and make what used to be subversive more palatable and accessible to the average listener. This can be interpreted as slaughter if done poorly or just out of greed, or it can be a celebration of being able to share something very dear to a small group of people with a larger audience. This is what genuinely excites me”, GEIZ elaborates. “I simply can't wait to share these obscure curiosities with people.”

On the meaning behind this new track, the producer explains, “Diamond Devils are the ones who hold brilliance in them, have the world at their fingertips, who could do anything but chose to do nothing. The song is about how youth is wasted on the young, but perhaps it is meant to be wasted. Diamond Devils is very much about that feeling of ennui and how there is beauty in that sense of feeling lost. Revelling in futility.” And, doubling down on his musical mission, he adds: “It's also a banger.”