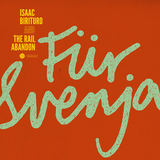 Following the beautiful reactions to first single Yesu Yan Yan, Wah Wah 45s are very proud to present Für Svenja, the second single from the label’s latest signee, Isaac Birituro and The Rail Abandon. The track is out now following a radio premiere care of Cerys Matthews on BBC 6Music.

Named after Svenja Albers, a talented photographer who was instrumental in capturing Isaac and Sonny’s journey to creating Kalba, the upcoming album, Für Svenja is an ode to the beauty of human interaction. The lyrics touch upon the distraction from personal connections that is digital connectivity and how, actually, being without it brings forth the truth that none of us are really that different from one another.

“For me this song embodies the whole trip to Kalba––a lesson on how we interact with each other on a personal, community, and global level; how distance can sometimes make you feel detached from people and cultures different from yours, as well as how often we tend to use technology as a means to excuse ourselves from the difficult task of explaining ourselves and understanding others,” says Sonny Johns, aka The Rail Abandon.

The song was sparked by a moment in which Svenja led Isaac and Sonny to a place where the light was perfect to photograph them in; that trip inspired the warm, soothing riff, which was immediately recorded by the band, and wonderfully accompanied by The Kalba Birifore Choir.

With two singles now out, Yesu Yan Yan and Für Svenja, Wah Wah 45s are gearing up to release the long-player, Kalba, on the 31st of May, 2019. The initial wave of support and love - from the likes of Tom Ravenscroft, Huey Morgan, Cerys Matthews, the editorial team at Bandcamp, to radio stations and publications from different corners of the world - has been overwhelming, and set the tone for what this project deserves in terms of recognition.

A part of the proceeds from this album will be used to help the Rüt’n’Rock Association build a school in Kalba, North Ghana, and continue to make music that will impact people’s lives in the most positive and long-term oriented way known–through education.