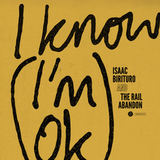 Sticking to the theme of the previous single, Für Svenja, I Know (I’m OK) is rooted in the beautiful sentiment of friendship and connection. About the making of this song Sonny Johns aka The Rail Abandon says: “After writing this I couldn't find a melody I liked, but it left me with a feeling I couldn't put into words; one that reminded me of the feeling I got from the song Village Kids by Samantha Whates. So I asked her to write something.“

Samantha is a longtime friend and collaborator of Sonny’s and is also his band-mate in the sensational project Pica Pica. Her voice conveys a message of positivity, full of life, energy and strength, despite living in a world where borders and limitations are still the norm – and definitely a struggle.

This statement album, recorded in North Ghana, in the town which gave the record its name, Kalba, has already received the attention of Tom Ravenscroft, Cerys Matthews and Huey Morgan on BBC 6Music, as well as John Kennedy on Radio X, and will be presented live on Sunday, June 16th, at Giant Steps in East London.

The album will be re-created live on a sound system that is the audiophile's dream, featuring a stellar line up of musicians hailing from as far afield as Burkina Faso, Equatorial Guinea, France, and of course the UK, playing extended interpretations, and welcoming some surprise guests.
Wah Wah 45s DJs, Dom Servini and Adam Scrimshire, will be joined by rising stars Village Cuts, and very special guest, the aforementioned Tom Ravenscroft.