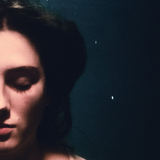 An artist of intense honesty, singer and composer Ruth Patterson bares her soul with courage, conviction and vulnerability. Growing up in the moorlands of North Yorkshire, Ruth inherited a romantic melancholia equally from the land and from the music of such pioneering pop dreamers as Kate Bush and Nick Drake. Through her brooding lyricism, atmospheric vocals and oceanic arrangements, Patterson’s unique take on baroque pop also lends a nod to contemporary writers including Aldous Harding and Angel Olsen.

Her debut solo single, ‘Sink or Swim’, is a searing and introspective deep-dive into her own state of mind.

“This is about living with mental instability and the battle to keep our heads above water”, Ruth states of ‘Sink or Swim’. “It’s written about a panic attack I had last year and I really felt like I was drowning - the loss of control, disappearing reality, not knowing when it will end... I guess this song is me sharing my own experiences and hopefully it will connect with other people that maybe feel the same way. It seems with everything that's going on, the whole world is living in a state of anxiety. We've all lost a sense of control as our reality is so rapidly changing. Now, more than ever, we need to have these conversations.”

Under the mentorship of Fiona Brice (Anna Calvi, John Grant), Ruth’s tempestuous string quartet arrangements simmer, swell and break into the chorus before disappearing into the brooding calm of the verse, only to churn and swell again. Lyrically there is a powerful sense of the sea, of time, of nature: a poetry of metamorphosis, as “growing into the ground, bodies turn to clay”, and body heat “flows away” into the cold blackness of the ocean; an encompassing sense of loss and dread. But there is redemption: “I know you’ll bring me back this time”.

The track was brought to life alongside Matt Terry (producer of the Noisettes and The Royal Shakespeare Company Orchestra) at his own VADA Studios and the mix engineer wizardry of Gareth Jones, whose production credits include Nick Cave & the Bad Seeds and Goldfrapp.

Ruth Patterson is Sage Gateshead’s 2020 Artist-In-Residence (following on from her previous stint as a mentee of Nadine Shah, during Shah’s 2018 residency) as well as an activist and ambassador for the organisation Attitude Is Everything who campaign to improve deaf and disabled people’s access to live music. She has toured extensively, created three acclaimed albums as leader of much loved folk-rock band Holy Moly & the Crackers and has had music featured in Radio, TV, Film and Theatre. Ruth was diagnosed with severe arthritis at 15 years of age, and then with Ehlers-Danlos syndrome at 21. She has been a wheelchair user since. >>>

Ruth was interviewed on BBC Radio 4’s Front Row programme in early June 2020, about her interesting musical career to date and the issues she has faced as a disabled performer.

It will be followed by further singles from Ruth Patterson across the year and into 2021.