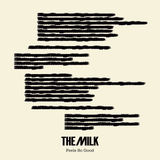 Wah Wah 45s are proud to present “Feels So Good”, the third single to be taken from southern soul boys The Milk’s third album, “Cages”.

This single, which also boasts a brand new remix from Scrimshire, is set to build on heavy radio support for the new album from the likes of Huey Morgan, Radcliffe & Maconie and Cerys Matthews on BBC 6Music, The Selector, Radio X, BBC Radio London, and beyond, to add to mainstream and specialist press props. The band have also announced new tour dates for October (having postponed their Spring album release tour due to the coronavirus crisis).

If their debut, “Tales from the Thames Delta”, was inspired by hedonism and second LP “Favourite Worry” by introspection, “Cages” is an impassioned conversation with the world which seems even more relevant in the current crisis.

“Feels So Good” is about transition. Drawing on individual and shared experiences of taking a step into the unknown, and being vindicated for having made the right choice.

As with all the tracks on the LP, it was recorded live. The intricate syncopated rhythms took a while to lock in, but once they did, the band knew the track would storm onto the album. They enjoyed exploring what role synths could play with this track too.

“Personally, when it gets to the outro with the haunting vocal, I don’t want the song to stop. It could almost be the end of a euphoric Ibiza sunrise”, says frontman Rick Nunn.

The single package comes complete with a special remix from Wah Wah 45s label boss Scrimshire (an acclaimed artist in his own right, whose 2019 solo LP “Listeners” – featuring collabs with the likes of Emma-Jean Thackray, James Alexander Bright and Georgia Anne Muldrow – gained plaudits including BBC 6Music Album of the Day). His cunningly entitled “Bruk Up The Family” rework takes the band into new territories and is sure to be getting plenty of love from the more forward thinking DJs over the coming weeks.

“I've had the pleasure of being at a lot of the sessions for the last two albums The Milk made for us. So it's a treat to finally get hold of those recordings and subvert the decisions and processes in my own way. The sun has been blazing through my studio window for much of the lockdown, alongside a lot of LOUD roadworks. So I've tried to bring sunshine and noise to this version.” - Adam Scrimshire

Since signing to Wah Wah 45s, the band released their second album "Favourite Worry", which became one of BBC 6 Music’s albums of the year, and “Cages”; sold out London's Union Chapel, KOKO and Hoxton Hall; toured with the Fun Lovin' Criminals and are currently eager to get back on the road in October 2020 with a rescheduled UK tour.