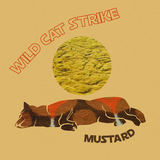 Brighton four-piece Wild Cat Strike have released their new single “Mustard’ along with the announcement of their upcoming EP “Mustard Coloured Years” via Small Pond Records.

Commenting on the single, bassist Chris Whitehorn says: “Mustard is a 2020 take on a 1950s waltz. We recorded at Echo Zoo, Eastbourne (UK) where the word around the campfire is that the mixing desk once belonged to Tony Visconti, who had recorded Bowie with it. We tracked in the room together to keep the feel of how we play it live, then overdubbed guitars and a sumptuous selection of 70s synths. Later we added vocal harmonies (by our labelmate Bonniesongs, and our mates from Tall Ships and I Feel Fine) to give us that sea shanty singalong sound.”

“Mustard can be quite a divisive colour,” continues vocalist Danny Byrom, “whether it’s on some wallpaper or a suit shirt. And our thoughts can be both tasteless and inspired, dependent on context. Just like a pair of mustard-coloured corduroy trousers.”

Featuring the previously-released single ‘Toothcutter’—a track about self-fulfilling prophecies, the notion of destiny, and accepting your struggles as just being part of the bigger picture—the Mustard Coloured Years EP is another accomplished step in the right direction for this slow-burning, soulful, noisy-beautiful Brighton quartet. Recorded and mixed by former WCS drummer Joe Caple and mastered by Liam McMillan (Small Pond), sessions for the record took place at Echo Zoo, Eastbourne (as used by Paul McCartney and, um, Toploader...) between February and April 2019.

Prior to the new singles, the band most recently released their The Blood Orange Sessions EP (2019), featuring live sessions, reimaginings, and alternate versions of tracks from their full-length debut Rhubarb Nostalgia. Channelling their gleeful sense of cacophony and flair for sonic abrasion into an engrossing record of off-kilter indie pop songs that hooked hard on the heartstrings as they crisscross in and out of chaos, the EP was a beautifully packaged treat that showed a softer and more introspective side to their diverse, chameleonic indie pop.

To date the foursome have enjoyed radio support from the BBC Radio 1 Rock Show and Radcliffe & Maconie and Steve Lamacq at BBC 6Music, as well as John Kennedy on Radio X, with early press coverage from CLASH, DORK, God Is In The TV Zine, Echoes & Dust and many more. Over the past few years they’ve slowly but surely developed their formidable sound via a relentless slew of live shows including sets at ArcTanGent, 2000 Trees, Y Not Festival, and Bad Pond Festival, and tour dates with The Xcerts, Delta Sleep, Tigercub, LIRR, Natalie Evans, I Feel Fine, and more.