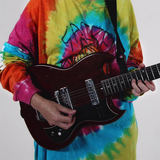 “What Will Become Of The Wishing Well” is the new single from Yumi And The Weather, backed with another brand new track, “The More I Hear The Less I Believe”, on this AA-side radio single. Together these songs give the first taste of the forthcoming “Some Days” EP - the first Yumi release since signing to Brighton’s fast rising Small Pond label - which was made during lockdown and will be announced soon for release in early December.

Like so many of us in 2020, Brighton-based Ruby Taylor, the brains behind the musical project known as Yumi And The Weather, found herself in limbo. Midway through national lockdown, Ruby sat in her partner’s flat, equipping herself with an old laptop, well-loved headphones, and a small midi-keyboard. There she began work on a spellbinding tapestry of songs that form her new EP Some Days, released 4th December 2020 through Small Pond Records.

Since first emerging in 2013 with her critically acclaimed EP ‘All We Can’, Yumi And The Weather has set an ambitious course to perfect a unique blend of mysterious technicolour alt-pop, culminating in her inspired self-titled debut LP. Released in 2018, the album brought with it plaudits and heavy daytime and specialist airplay from BBC 6Music’s Lauren Laverne Shaun Keaveny, Nemone, Don Letts and Guy Garvey; Radio X and Amazing Radio playlisting; festival appearances at Secret Garden Party, Green Man, Kendal Calling and Bad Pond Festival, and support slots for British Sea Power.

With subtle nods to ethereal 80s synth-rock, 60s soul, and New Romantic pop, ‘Some Days’ finds Yumi And The Weather shaking hands with the most self-assured and daring version of herself. In a time of pandemic, failing power structures, and civil unrest, Ruby did the only thing that made sense to her at the time—to create, and to find her own strength in the process, as she explains: “The strong underlying themes are ones of uncertainty and a heavy fear of the future, and trying to stay calm, confident, and strong in the present”.

‘What Will Become Of The Wishing Well’ leads the charge with electronic rhythms and hissed melodies made for shoulder pads and heavy eye make-up, there are moments of stark contrast ahead. There’s a sense that underneath the heady escapism, there’s some real fun being had here, too.

“I think my intention with finishing the EP and releasing it quickly was the fact that it made me so happy in what is a very strange and fear mongering time,” affirms Ruby. “I like to think it will make others happy too. That’s my main aim with this EP, and the reason why I finished it.”

“There was a sense of achievement in producing an EP just by myself again,” she continues—her first time back behind the desk since 2014’s ‘Something Tells Me’ EP. “I spent the first couple of months experimenting with melody lines, synth sounds and solos. Then when we realised lockdown was going to last much longer than originally thought, I began to write, record and mix the rest of the songs. I tried to avoid overproducing it, so kept things simple without too many tracks or plugins and mostly used MIDI drums.”

Citing influence from ‘80s titans Ah-Ha, Dire Straits and Fleetwood Mac, as well as contemporaries Alvvays, Yumi And The Weather draw on a playbook of songwriting giants. Indeed the homespun nature of these current songs echoes loudly with the intimate charms of Springsteen’s Nebraska tapes. However, by drawing on a very modern, shared context of human experience, Yumi And The Weather has created a patchwork diary of songs that document a talented songwriter enjoying her craft, and that’s all-consuming in its own right.

With a second full Yumi And The Weather studio album campaign set for 2021 (more details to be announced), having been delayed from its original 2020 release due to the coronavirus crisis, this brand new and inspired EP sees Taylor documenting a bizarre and unsettling year in her own incredible creative style.