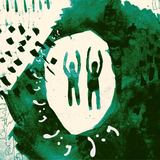 Lyrics and music by Runabay
Spoken Word taken from poem ‘We Must Create’, written and performed by Stephen James Smith. ‘We Must Create’, specially recorded for Runabay, was originally a Creative Ireland Programme commission
https://www.stephenjamessmith.com/
https://www.creativeireland.gov.ie/en...

Dig - Lyrics
We stood... low, by the limestone at the turning of the road,
We took shelter, rain was the norm,
I placed my arm round to keep your body warm,
Threw a hand out to leave in no doubt to commuters and the passers-by,
Below the college shirt and shoe polish,
Electric lines ran overhead

Arrived at home to an empty room where I'd sit down and I’d waste the day away,
In all the silence I didn’t understand when I leave will the sound remain the same

And through the afternoon, twisted metal on a cathode silver screen,
Another scratched CD, breathe it, sleeve it, insert and start again

And soon they’d all arrive, as the teacher starts asking ‘bout our weekly passions,
End of his tether he’d make a threat, and call his army, then bend and disarm me,
And I wonder, was all worthwhile, though changes were needed, expressions had fleeted,
Back to another fraught long day, the diggin’ll be repeated in your head