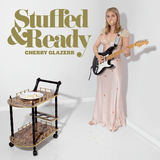 “‘Wasted Nun’ is about a woman trying to come to grips with her life,” says 22 year old Cherry Glazerr front woman Clementine Creevy. “She’s a tragic woman. She hates herself and is trying to move through the world but gets deflated by extreme self-loathing. She wants to harness the power of the universe but instead she turns to self-destruction. The song is aggressive and intense because I’m letting out my anger, I’m enraged. People want girls to be strong, I want to be strong, but I just feel angry, and those are two very different things. There’s a stubbornness there, I know.”

Director Jessica Collins describes the video: “Music, blood, blades, babes. Sometimes anger looks like a weird beautiful demon nun that wants to rip right through you! You’re not sure how she’ll do it, but you know you want her to! The soft and sharp of brutality makes you want to bite down on something and rip it off! RIP IT UP! DO SOMETHING!”


Watch the video for Wasted Nun here
Stuffed & Ready follows Cherry Glazerr’s Secretly Canadian debut Apocalipstick, an album that sizzled with Creevy’s confidence, vision and fiercely idiosyncratic personality. When Creevy began writing Stuffed & Ready, she found unexpected inspiration by turning inward. Her unblinking honesty attempts to reconcile confusion and anger in the current political climate. “I am telling my story of how I feel and where I am in life,” she says. “I’ve felt the need to explain my feelings … not just state them, but search for why I feel the way I do honestly. With Apocalipstick, I was an over-confident teenager trying to solve the world’s problems. With Stuffed & Ready, I’m a much more weary and perhaps a more cynical woman who believes you need to figure your own self out first.”

Cherry Glazerr will embark on a North American and European tour in support of Stuffed & Ready.