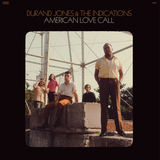 
Durand Jones & The Indications will release their sophomore album, American Love Call, on March 1st via Dead Oceans/Colemine Records. After sharing previous single, Don’t You Know, the band returns with the follow-up cut: the poignant, politically charged album opener, Morning In America. “It’s a fraught moment in our history. Morning in America is a song for this moment,” says the band. Penned by drummer Aaron Frazer, the band has this to say regarding the track:

The lyrics speak to how many of us feel every day in this time of political and environmental uncertainty— flitting between anger, despair, anxiety but ever returning to a sliver of hope that there’s still a path forward.

We so often divide ourselves by our differences. Acknowledging those differences is crucial; listening to those different from us is crucial. But viewed solely through that lens, we are fragmented and few. When we look at the country along economic lines, however, a different picture emerges. Suddenly people of all of colors, in every part of this country, can find themselves on the same side, united by a shared struggle to simply survive in the richest nation to ever exist.

This song was inspired by The Poor People's Campaign, a movement started by Martin Luther King Jr. shortly before his assassination. It functions today as a nonpartisan organization that promotes intersectionality and inter- movement unity as a tool of addressing systemic injustices.

It’s accompanying video, directed by Ellie Foumbi, find’s immense inspiration in the song’s message. “It's impossible to hear this song and not connect its message to the current political climate in America,” says Foumbi. “It makes you stop and question the ways in which our country has changed and whether we're as far along as we should be. The themes of inequality, social and economic oppression, and the disparity between the haves and the have-nots jumped out at me. The juxtaposition between past and present, rich and poor, black and white are so prevalent in our society that it only felt right to highlight them in the video.”

Watch Video For Morning In America


Helmed by foil vocalists Jones and Frazer, The Indications’ sound of “old-school soul with a new-school
honesty” (NPR’s All Things Considered) is rounded out by Blake Rhein (guitarist), Kyle Houpt (bassist), and Steve Okonski (keyboard). The Indications will tour the US extensively this spring in support of American Love Call. A full list of tour dates are below.